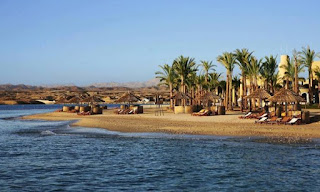 By: Egypt Today staff
CAIRO – 15 October 2017: As a tourist destination, Egypt is entering a very promising winter season, as all booking statistics indicate under the current circumstances of political stability and safety in the country.

After the number of tourists to Egypt increased notably during the last summer season in comparison to the summer season of 2016, it is expected that Egyptian tourism will continue recovering.

Ali Okda, manager of a travel company and the Egyptian representative of the German Company FTI, has revealed that booking rates are great.

He added that the number of flights to Egypt organized by his company increased from 70 flights to 144 in November, as the company aims to increase the number of tourists traveling to Egypt from Germany, Switzerland, Austria and France.

He noted that Hurghada has the highest number of flights, with 102 flights to the city each week.

Okda also predicted that flights between Moscow and Cairo will be resumed by the end of October,

according to statements by Russian officials

, assuring that the stability of the political scene in Egypt has helped greatly in improving the status of tourism.

On the other hand, Mohamed Othman, a member of the marketing committee for Upper Egypt, stated that the winter season is quite promising for cultural tourism, assuring that the gradual increase of tourist numbers in Luxor and Aswan will hopefully exceed the 2010 peak eventually.

Othman added that there is a spike in numbers of Chinese and Indian tourists visiting Upper Egypt, expecting the numbers of Chinese tourists to have reached 300,000 by the end of 2017, noting that more and more nationalities are becoming attracted to cultural tourism, such as Italians and Scandinavians, as a result of the efforts exerted by travel companies in advertising traveling to Upper Egypt.

Othman also announced that flights from Japan, Paris and Spain will be returning by the end of October, in addition to an increase in German flights to Luxor. He further noted that Thomas Cook will be resuming flights to Egypt from London and Manchester by the end of November.
Posted by Glenn Meyer at 7:38 PM