Italy is celebrating the 200th anniversary of the discovery of the Abu Simbel Temples by Italian circus giant and explorer Giovani Battista Belzoni, reports Nevine El-Aref 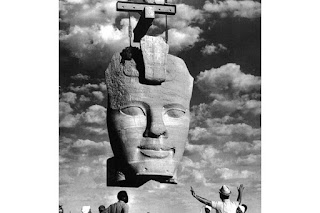 Early on Sunday, the usually sedate Upper Egyptian town of Abu Simbel was abuzz with Ramses II fever as around 3,500 visitors waited for the sun's rays to penetrate through the Abu Simbel Temples' inner sanctuary to illuminate the face of the Pharaoh Ramses II and the statues of the god Amun-Re-Hur-Akhty, leaving the god of darkness Ptah in the shade because of his connection to the underworld.

This phenomenon takes place twice a year on 22 February and 22 October, and it coincides with the birthday and coronation of the ancient Egyptian Pharaoh Ramses II who built the temples. Some believe it also marks the time of cultivation and harvest.

This year, the event coincides with the 200th anniversary of the temples' discovery in 1817 by the Swiss explorer Johann Ludwig Burckhardt and Italian circus giant and explorer Giovanni Battista Belzoni. The Swiss celebrated the anniversary in August to mark Burckhardt's uncovering of the smaller temple at Abu Simbel and partial unveiling of the larger one.

This week, the Italians staged their own celebration to mark 200 years since Belzoni entered the temples. In the year of the temples' discovery, Burckhardt passed away and Belzoni continued his journey to reach the larger temple, eventually freeing it of the surrounding sand and being the first modern visitor to enter it.

Two exhibitions were officially opened to mark the event at the Italian Cultural Institute in Cairo and the Abu Simbel Visitors Centre in Abu Simbel.

On the second floor of the Cairo Institute, visitors are welcomed by a model of the Abu Simbel Temples partly covered with sand, a scene that Belzoni faced 200 years ago. At the entrance of the exhibition hall, a large panel contains photographs and details of people who played a role in the temples' salvage operation in the 1960s, including then minister of culture Tharwat Okasha, Egyptologist Gamal Mokhtar, and Vittorino Veronese, the former UNESCO director-general who launched the world appeal to save the Nubian Temples.

"An Italian was not only the first to enter the Abu Simbel Temples, but also the first to call for their salvage from inundation in the aftermath of the Aswan High Dam's construction," Giuseppina Capriotti Vittozzi, director of the Italian Archaeological Institute in Cairo, told Al-Ahram Weekly.

She said that Veronese had launched a worldwide appeal to save the Nubian Temples in 1960. It involved the Italian company Salini Impregilo of Milan and a specialised workforce from the city of Carrara in Italy that cut the blocks of the temples so they could be moved to their new location. 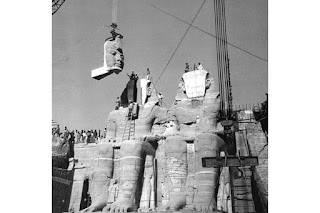 
"This very tricky work was entrusted to specialists from the marble quarries in Carrara, who are the heirs of an ancient and prestigious tradition," Vittozzi said.

She added that throughout the rescue work Angelo Pericoli, a topographer at the Italian Military Geographic Institute (IGM), had participated in the reconstruction of the temples on the basis of photogrammetric information provided by the French National Geographic Institute.

"Thanks to this expertise, the exact placement of the blocks was guaranteed," Vittozzi said.

Researcher Francis Amin who organised the exhibition at the Italian Institute told the Weekly that it does not celebrate only the rediscovery of the Abu Simbel Temples by Belzoni, but also 50 years since the salvage operation in the 1960s and the important work of Egyptian and foreign archaeologists who helped in the rescue, such as French Egyptologist Christian Noblecourt, Egyptian Egyptologist Selim Hassan, and Italian Egyptologist Sergio Donadoni.

The exhibition shows a collection of rare books on Abu Simbel written by Burckhardt and Belzoni, as well as a collection of postcards, coins and other items bearing the image of the temples and stamps and journals commemorating the Temples' discovery and salvage.

Amin said the exhibition also related the history and story of Abu Simbel over the past 200 years through drawings and photographs by Belzoni himself, Prussian Egyptologist Carl Richard Lepsius, and Egyptian film director Shadi Abdel-Salam. The latter's work is represented by film posters of Ramses II, a film that Abdel-Salam planned to direct but was prevented from doing so by his early death.

The exhibition ends with an Arab tent in which a tall man in traditional Arab clothes is sitting — an actor representing Belzoni who was more than two metres tall. The exhibition will run for 30 days in Cairo and is then scheduled to transfer to Alexandria, Aswan and Luxor.

"Photographs of the collection on show in this exhibition are now on show at the Abu Simbel Culture Centre to mark the solar alignment and the 200th anniversary of the discovery," Amin said.

Italy is also celebrating at home this year to mark the event under the title of "Belzoni's Year", and his hometown of Padua is participating. "Explorers and scholars and travellers who came to Egypt during the 19th century such as Belzoni, [the French Egyptologist] Champollion or Lepsius took items from Egypt to their countries at a time when Egypt did not have laws or regulations to protect its heritage," Amin said, adding that Mohamed Ali, the country's then ruler, allowed them to transport antiquities and to trade in them.

"However, these men were not robbers, as some have said, because they did not take the antiquities illegally or smuggle them out of the country. On the contrary, they took them legally under the protection of Mohamed Ali who issued official decrees to this effect," Amin added. 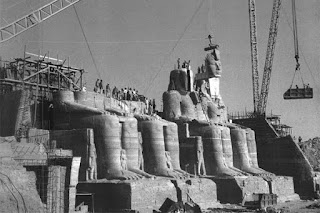 
WHO DISCOVERED ABU SIMBEL? One question that is often asked is whether it was Burckhardt or Belzoni who discovered Abu Simbel. This question has long perplexed Egyptologists, but for Marco Zatterin, deputy director of the La Stampa newspaper in Turin, both Belzoni and Burckhardt should take the credit.

"Without both discoverers we would not know about Abu Simbel and what it meant," Zatterin told the Weekly, describing them as two faces of the same coin.

He said that after Burckhardt had failed to enter the larger Temple, Italian antiquities collector, diplomat, and politician Bernardino Drovetti, a former soldier in Napoleon Bonaparte's expedition to Egypt in 1798/99, searched for the entrance but failed to find it.

It took Belzoni almost 40 days to remove the sand from around the temple, finally succeeding in making a hole in it in order to enter the temple. He stayed at the temple for two days, only leaving for Thebes when he did not find any treasure. The Frenchman Jean-Francois Champollion then arrived and continued the excavation of the temple.

"Belzoni was a very lucky man, and throughout his four years or so in Egypt he was able to discover very important monuments that nobody else had found previously," Zatterin said. He added that Belzoni had discovered the exquisite tomb of Seti I, which this month is celebrating the 200th anniversary of its discovery. Belzoni was also the first to enter Khafre's Pyramid at Giza.

Belzoni spent most of his time in Egypt in Seti I's tomb, where he copied every single drawing. Upon his arrival in London some years later, he recreated a replica of the tomb in Piccadilly.

Belzoni was born in 1778 in Padua. As a young man, he felt dissatisfied in a world with narrow horizons and left his hometown for Rome. He subsequently travelled to Paris and then to Holland, where he began hydraulic studies. 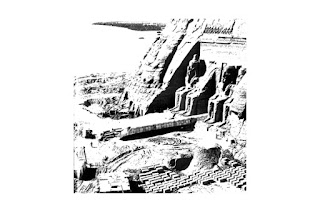 
In 1803, he landed in England and married a young woman from Bristol, Sarah Banne, and entered a theatre company. His extraordinary physical sturdiness led him to perfect a performance known as the "human pyramid", in which he managed to keep 11 people on his shoulders. In this role, he became a popular character called the "Patagonian Samson".

In June 1815, Belzoni arrived in Egypt, responding to an invitation from Mohamed Ali who was looking for a European able to work on irrigation. However, Belzoni soon turned his extraordinary capabilities to archaeological discoveries. During three trips along the Nile between 1815 and 1819, he achieved great success in discovering sites in the country.

In 1817, he went to Nubia, where he freed the Abu Simbel Temples of sand, entering them in August that year. In Thebes, he discovered the tomb of Ay, Tutankhamun's successor, and the beautiful tomb of Seti I. In February 1818, he managed to locate the entrance to Khefre's Pyramid in Giza.

"These are just some of the ventures of the Paduan giant, to which we must add a journey to the east to reach the remains of the city of Berenice on the Red Sea," Zatterin said.

He described Belzoni as a tireless explorer, who adapted to live in extreme conditions in search of his goals. His wit, intelligence and physical strength merged with an extraordinary capacity for dialogue with the local populations, from whom he was able to obtain the necessary help to engage in challenges at the limit of the possible.

"It is not by chance that his life inspired US film director George Lucas in his film Indiana Jones and the Raiders of the Lost Ark," Zatterin concluded.