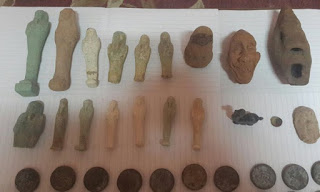 CAIRO – 21 October 2017: The Egyptian Tourism and Antiquities Police managed to seize around 99 artifacts from two citizens in Assiut.

The accused attempted to search for antiquities under their home. They wanted to sell the discovered artifacts for LE five million.

Police found twelve limestone Ushabties, pottery statues, a statue made of black basalt, gemstone collections, and 80 historical coins in their home.
The artifacts dated back to different eras, such as the Ancient Egyptian, Greek and Roman periods.

The police also found a four-meter deep hallway connected to a crypt.