The Sound, Light, and Cinema Company owns the project's land of 42,000sqm 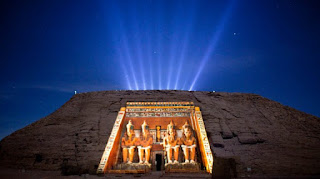 The Sound, Light, and Cinema Company urged the Red Sea governorate to increase the construction part from 10% to 20% in a tourist project in Hurghada so that the project's investor can recover its costs, according to the acting chairperson of the company, Najwa Al-Shazly.

Al-Shazly said that her company sent its request to the Red Sea governorate in March, but it has not received any response yet.

The owner company aims to establish a sound and light project on an area of 42,000 square metres, in addition to a food court, motel, and cinema.

Al-Shazly stated that her company is negotiating with a Chinese investor to finance the project, adding that he demanded the company to increase the construction part so that he can recover the project's costs amounting to $17m.

She further added that her company submitted the Chinese investor's request to the chairperson of the Holding Company for Tourism Hotels and Cinema, Mervat Hataba, as well as the Red Sea governorate.

She pointed out that Hurghada acquires about 20% ​​of the total tourist flows to Egypt, and the investor is supposed to recover the allocated funding within six years after the operation of the project according to the feasibility study of the project.

The Sound, Light, and Cinema Company's losses declined at the end of the last fiscal year to EGP 11m compared to EGP 19m before the last fiscal year. According to Al-Shazly, this decline came as a result of the company's efforts to increase its revenues by increasing concerts and rationalising expenses.

The company aims to reach a balance point during the current fiscal year, especially as Egypt's tourist flow witnessed some development in the second half of this year.

Al-Shazly said her company has increased its concert ticket prices since April from EGP 125 to EGP 150 for foreign visitors.

She noted that the concerts' operating costs increased by 300%, which forced the company to increase ticket prices.

She added that before the flotation of the pound, the previous ticket price was $10 or its equivalent in Egyptian pounds, so it was supposed to be increased to EGP 200 to keep pace with the current dollar price.

The company's activities are divided into three sectors. The main activity is the sound and light concerts at the pyramids, in addition to four other regions in the south.

Second is the company's lighting for the Citadel of Salah al-Din Al-Ayoubi and Al-Moez Street, while the third activity depends on organising concerts at the Pyramids of Giza or Temple of Philae in Luxor.