Inspired by Kasia Szpakowska's talk for the Friends of the Egypt Centre last night, I thought I would introduce one or two artefacts in the Egypt Centre which may have Amduat influences. Kasia's talk was all about the Amduat, the ancient Egyptian afterlife book which shows the journey of the sun-god Re through the afterlife of the Duat. The earliest complete depiction known is from the tomb of Tuthmosis III (1479-1425 BC).

Unfortunately, we don't have any pure Amduat scenes in the Centre but during the Third Intermediate Period (1069-747 BC), Amduat scenes influenced the afterlife scenes shown in tombs, coffins and papyri. We do have some coffin fragments and a complete, coffin with Amduat influence. 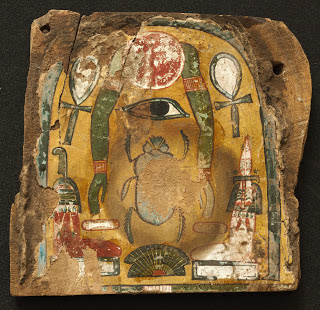 So, here we have W648: It shows the sun-disk in the morning embracing the scarab. Very similar scenes are shown on New Kingdom copies of the Book of the Dead Spell 15, but there a female figure usually embraces the sun-disk. By the Third Intermediate Period, it is the male god Osiris with elements of Shu from the Book of Caverns who does the embracing. And, by this date, Osiris is more closely linked with the scarab. In Amduate texts it seems that Shu is the god who reaches towards the scarab. 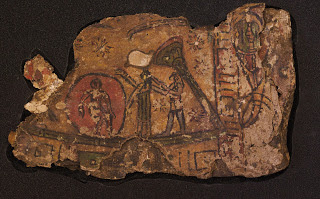 And here is EC1053: a piece of cartonnage showing Re in his night boat (you can see the stars), waiting to be reborn. He is shown as a child in a red uterine disk. It isn't entirely Amduat but does echo the idea of Re travelling through the Duat to be reborn, 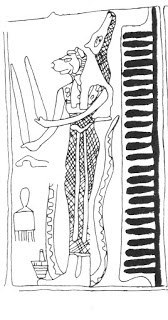 Here is my favourite character from the complete Third Intermediate Period coffin in the Egypt Centre showing
Hepet-hor, She Who Embraces Horus. This divinity is almost inseparable from Osiris, guarding his judgement hall. She also tends to appear where Osiris and Re 'get together' in order to renew Re. She does appear on an Amduat Papyrus in the Nelson Atkin Museum of Art, Kansas City, where she holds up Osiris.


Then there is the mound scene on our coffin, not unlike the Amduat mound of Sokar with the snake and rebirth connotations. And, Sokar was very much associated with Osiris.

While these examples are not entirely Amduat inspired, and several also have Book of the Dead or other Otherworld book influence, they also have some similarities with the Amduat.

Any mis-attributions, mistakes etc. are of course mine, not Kasia's!