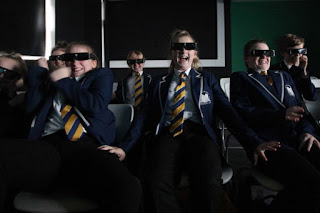 Pupils at 360 Academy in Sunderland enjoy a lesson the 3d room (Image: newcastle chronicle)Welcome to the classroom of the future.

Students can take a trip inside the Pyramids of Giza or even carry out a post mortem on an insect's organs.

This is no ordinary classroom, but a 3D classroom at Academy 360 in Sunderland.

The technology means a teacher could, for example, load a model of a bee, manipulate it and zoom in to demonstrate parts of its anatomy, and then dissect it in front of the class.

That's just one of the 12,000 different options students can immerse themselves in during lessons in the state-of-the-art room.

Soon, developers Gaia Technologies say, the programme will be so advanced students won't even need 3D glasses to put them right in the middle of the action.

Wowed by a realistic view of the tomb of Egyptian Pharaoh Tutankhamun, was Academy 360 student Ebony Dunn, 11.

Ebony said: "It's great to see what we look like in Egyptian times. It makes learning about these things really interesting when you can see yourself standing in these places."

The students may have been left stunned, but teachers say the room has more than just a wow factor - it genuinely helps young people to learn.

Head Rachel Donohue said: "The 3D Discovery Room is an exciting way to inspire young people about learning. Both primary and secondary children have been left in awe of the spectacular 'real-life' experiences that the room offers.

"Earlier this year we took a group of teachers to Gaia Technology headquarters in North Wales for a weekend to learn about 3D technology and how we could use it to engage young people; they've done a tremendous job introducing it here at the academy - it's a fantastic learning resource."

Jon Rashid, head of studio at Gaia Technologies, said: "The purpose of the 3D Discovery Room is to fire the imagination and excitement of the students. It is extremely engaging but also has to be geared to be part of the teaching platform with learning embedded within it.

"The package that we have installed at Academy 360 can contain 12,000 models covering all subjects, from biology and physics to geography and history."