The Ministry of Antiquities is to start a restoration and rehabilitation project for Bab Al-Azab area in Mediaeval Cairo, the scene of Mohamed Ali Pasha's infamous massacre of the Mameluks 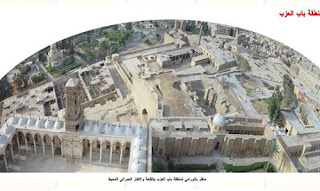 The Permanent Committee for Islamic and Coptic Antiquities has approved a project for the restoration of Bab Al-Azab, part of a Ministry of Antiquities plan to restore and develop a series of monuments in Historic Cairo.

Mohamed Abdel Aziz, director-general of the Historic Cairo Rehabilitation Project, said that the Bab Al-Azab restoration project is to be executed in three phases over a 10-month period, with a grant from the American Research Centre in Cairo (ARCE).

He explained that the first phase aims to consolidate the monumental structures of Bab Al-Azab, as well as removing the debris and garbage that has accumulated in the vicinity.

The project will include minor restoration work on the two doors of the Bab Al-Azab, along with its woodwork and windows. The blocks of the walls will be maintained and consolidated in an attempt to prevent erosion prior to the start of comprehensive restoration work.

The second phase, Abdel Aziz said, includes the full scientific documentation of every structure of the Bab Al-Azab, as well as preparing a plan for its restoration. Studies to rehabilitate the site and bring it back into use will also be provided.

The third and final phase consists of workshops and seminars to prepare a plan for the preservation of the buildings. This will involve the establishment of a group of young archaeologists and architects, especially from the local community, to ensure the preservation, maintenance and rehabilitation of the area and its historic structures.

Bab Al-Azab is the gate that once protected the original entrance to the Citadel. It was rebuilt in 1754 by Abd el-Rahman Katkhuda, from which the brass-bound wooden doors date. The gate witnessed the massacre of the Mameluks conducted by Mohamed Ali Pasha in 1811.