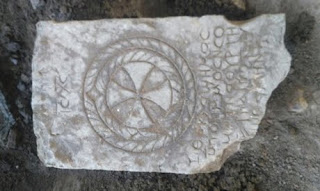 Egyptian archaeologists in Luxor have stumbled upon a decorative Coptic tombstone buried on the eastern side of the Sphinxes Avenue, under Al-Mathan Bridge.

The tombstone is carved of limestone and decorated with a cross and Coptic texts, Mostafa Waziri, secretary-general of the Supreme Council of Antiquities, told Ahram Online.

The exact date of the object has not yet been ascertained, nor the identity of the deceased. However, Mostafa Al-Saghir, director of the Sphinxes Avenue, said experts are now studying the tombstone find out.

The excavations in the Sphinxes Avenue are part of a Ministry of Antiquities programme to restore the area and transform it into an open-air museum.

The avenue was the location for the procession of the Festival of Opet, which included priests, royalty and the pious, who walked from Karnak Temple to Luxor Temple.

Some 1,350 sphinxes, with human heads and lion bodies, lined the 2,700-metre- long avenue, and many of them have been now been restored.
The avenue was built during the reign of Pharaoh Nectanebo I to replace an earlier one built in the 18th Dynasty, as recorded by Queen Hatshepsut (1502-1482 BC) on the walls of her red chapel in Karnak Temple.

Hatshepsut built six chapels dedicated to the god Amun-Re on the route of the avenue during her reign, demonstrating its longevity as a place of religious significance. 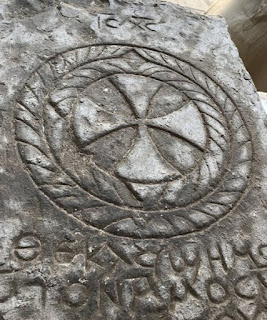