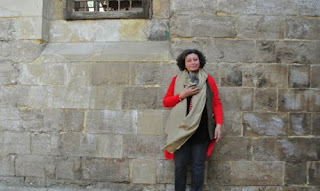 Architect and conservationist May El-Ebrashy

Next month, in the heart of Islamic Cairo, May El-Ebrashy, chair of the Built Environment Collective (BEC), a foundation for the preservation and awareness of the layered history of Cairo, will be oversee the launch of this year's "history awareness" walk.

The programme starts at the Islamic Museum, where a group of keen individuals, mostly young people, will be given an escorted and informative walk around the corridors of the recently renovated museum.

The aim will be to discuss not just the history of the pieces on display, but also what they meant with the societies in which they were made.

This is the fourth year that BEC has been holding these walks.

The collective was founded in 2011 and one year later El-Ebrashy took its office to the place "where it really belongs; at the heart of historic Cairo, on Al-Ashraf Street near the Mosque of Sayeda Nafissa."

BEC has organised other similar walks, such as a tour through El-Daher neighbourhood where the history of cinema was explored through the cinema buildings in the area, and religious history was examined through the stories of the schools there that are affiliated with different churches.

Another walk in the El-Khalifa district explored the history of Islamic period, including the Mamluk rulers and the Islamic religious figures of that period, and looked at how mythology.

The city walks are part of a cultural programme that BEC is implementing to help residents of the capital, especially those living in the historic quarters, to "better appreciate the city."

"I think we need to learn more about our capital," said El-Ebrashy.

"This is something that requires an awareness that goes beyond the basic information on the history of the buildings to the history of life in the city," she said.

To serve that purpose, BEC also organises lectures which target a younger audience.

The organisation also works on the ground on urban development issues, for example operating an initiative to promote a sense of public ownership of the monuments of the historic city.

"I guess it is important for people to relate to the historic quarters in a way that goes beyond the assumption that these are just old buildings that they have to live around; this gives them a reason to want to have these buildings looked after," El-Ebrashy said.

She added that it is about linking heritage to socio-economic development.

To promote these ideas, BEC has worked with the residents of the neighbourhoods of historic Cairo and the concerned government bodies to clear open spaces that have become filled with refuse, or to treat excessive underground water so it can be reused for the irrigation of small gardens around the neighbourhoods.

"And it has worked fine, to the pleasure of the local communities," El-Ebrashy said.

According to this architect-conservationist, many more similar initiatives need to be pursued for the residents of the capital "all across to be able not just to better appreciate what the city has but also to better enjoy their lives around the city."

El-Ebrashy is of the opinion that the growing and endless complaints about "the dilapidation of Cairo" are misplaced.

"I don't think Cairo has become dilapidated; I think that the services of the city needs proper overhauling with a strategic thinking about where the city is today and where it could be in a few decades," she said.

She argued that it is also wrong to suggest that the city needs desperately to be expanded into much vaster horizons due to an "assumed problem of overpopulation."

"I would argue that in terms of density Cairo has not at all reached its maximum capacity; I think it is essentially a matter of the capacity of the services of the city to live up to its population," she said.

According to El-Ebrashy, for example, the crowded traffic should not be immediately translated into an assumption that the city has too many residents for its own good.

"Actually, this is not the case; the city has an acute problem of poor public transport service that is forcing so many people to count on individual commutes and many more others to depend on the limited resources of the ailing transport network," El-Ebrashy said.

This, she added, is the case of historic Cairo neighbourhoods as in the "younger" parts of the city like Zamalek and Heliopolis.

El-Ebrashy said that she is worried about a growing tendency to drop the older parts of the city and to focus instead on new quarters.

"It does not work this way; neither in terms of urban development nor in terms of ecological conservation of natural resources," she said.

Obviously, she accepted, "the city has to develop and ultimately it would expand; this is a process of evolution, but the question is how to do this or rather are we actually doing this or are we mistakenly trying to abandon what we have in favour for something that some of us think would be better than what is already there."

"It is true that the capital started at one point upon the arrival of Muslims to Egypt and has grown to be bigger, but it is also true that today we have a city with so much history like Cairo and we cannot just abandon this under the call of modernisation," she argued.

In this context, El-Ebrashy draws the line between the creation of satellite cities like New Cairo "that could prove to be financially purposeful, given the real-estate business it brought about, but are not really purposeful for the improvement of the quality of life of the city as a whole, nor for that matter for the connectivity of society in the capital because today we have the people who are born and brought up in the heart of city, including the suburbs, and those whose life start and move on in the satellite cities, including the gated communities."

"I think what we need to do today is to give our capital a new lease of life; this requires a clear strategic vision and a new set of laws that would have to accept that Cairo is a very diverse capital, in terms of its social and urban fabric, and that what is good for one part is not good for another."

The starting point for this vision, El-Ebrashy argued, is not to build "a new capital" but to decide how to fix and expand the existing capital. Then, she argued, there needs to be made-to-measure plans for the different neighbourhoods depending on their architectural and social-make up.

Short of this, El-Ebrashy fears that Cairo's beauty will continue to dwindle while the new projects will inevitably fail to have a much better fate than the many other attempts that have been made over the past four decades to bypass and change the historic metropolis.