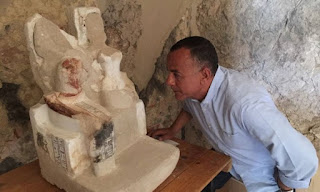 CAIRO – 24 October 2017: Among the latest discoveries found in Luxor is the royal goldsmith's 3,500 year old tomb proving that more undiscovered tombs are to be discovered in Luxor.

The royal goldsmith's name was Amenemhat; he lived in the desert province of Luxor, Egypt, about 3,500 years ago during the 18th dynasty (circa 1567 B.C. to 1320 B.C.). His work as a jeweler was dedicated to the ancient Egyptian sun god, Amon-Re, the most powerful deity in ancient Egyptian civilization.

After five months of excavations led by the archaeologist Mostafa Waziri, the tomb was uncovered in September at Draa Abul-Naga, a necropolis for noblemen and rulers near the Valley of the Kings, on the left bank of the Nile River.

The newly discovered tomb includes an entrance leading to a chamber where damaged statues depicting the tomb's owner are placed. The statues show Amenemhat sitting on a high back chair beside his wife who wears a long dress and a wig. Between their legs stands, in a smaller scale, a little figure of one of their sons, according to the Ministry of Antiquities.

In addition, the chamber contains pottery, 50 wooden funerary masks, and 150 ushabti figurines. The figurines are small blue, black or white statues that ancient Egyptians placed in tombs to serve the dead in the afterlife.

The tomb has two burial shafts; the shaft on the right side of the chamber contains a collection of mummies, sarcophagi and funerary masks carved in wood along with a collection of statuettes of the tomb's owner and his wife.

In the left side shaft, a collection of the 21st and 22nd dynasties sarcophagi was discovered but regretfully was subjected to deterioration during the Late Period. 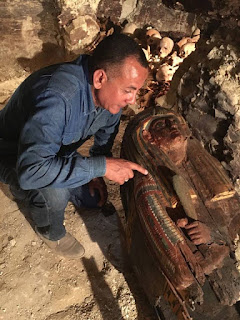 A wooden sacophagus was among the items unearthed – Official Facebook Page
In the courtyard, the mission stumbled upon a group of burial shafts which probably date to the Middle Kingdom. In one of them, the mission unearthed a family burial of a woman and her two children that consists of two wooden coffins and a collection of head rests. 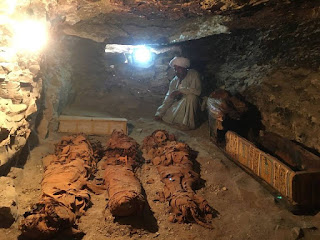 The three mummies- Official Facebook Page
Amenemhat's wife died at the age of 50 and suffered during her life from several diseases like cavities that led to abscesses in her jaws' and a bacterial disease in her bones, according to Egyptologist Sherine Ahmed Shawqi, who is specialized in bones.
"We are not sure if these mummies belong to Amenemhat and his family," Waziri said in an interview, as mentioned in New York Times.

The discovery was modest, but very important for marketing, especially for a country trying to revive its tourism industry, said the Minister of Antiquities Khaled al-Enany in a press conference held on September 9, 2017.

At the same time, an Egyptian archaeological mission of the Antiquities Ministry has discovered in August ancient tombs and ruins of a residential area dating back to the Coptic era in El-Bahnasa city in the Upper Egyptian governorate of Minya.
Egyptian authorities hope that new discoveries may increase the number of tourists in
Posted by Glenn Meyer at 7:44 AM