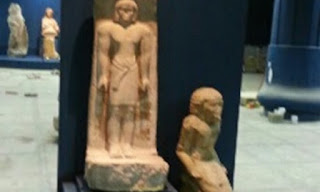 CAIRO – 17 October 2017: A team of workers are currently organizing various collections of antiquities related to Matrouh's heritage in preparation for its display at the newly established Matrouh Museum for Heritage in the upcoming period.

The antiquities gathered have been collected from several Egyptian museums across the country including artefacts from the Egyptian Museum in Tahrir and National Suez Museum among others, according to state owned agency Egynews.

Among the gathered collections is the upper part of the statue of Ramses II of the ninth Dynasty, manuscripts, and stone plates among others.

Matrouh Museum is a collaborative project between the Ministry of Antiquities and Matrouh governorate to include funding, construction of exhibition halls, and lighting systems, that all came as part of a protocol signed in August.

The new museum in Matrouh is expected to include 1,000 artefacts dating back to ancient Egypt. The new project is also expected to exhibit the role of Matrouh as a governorate in boosting trade and businesses and connecting north to west.

Another museum in Matrouh has been opened recently called Romel Museum, featuring antiquities belonging to Egyptian war and Matrouh's heritage.
Posted by Glenn Meyer at 9:24 AM