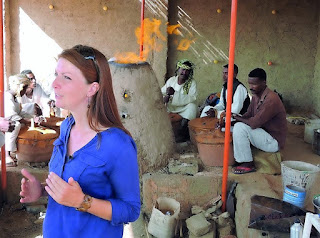 UCL Qatar archaeologist Dr Jane Humphris says her return to work in the ancient city of Meroe in Sudan, earlier this month, felt like "coming home". Dr Humphris, who heads UCL Qatar's Sudan archaeology project, has been overseeing investigations into ancient iron production associated with Meroe, a royal capital of the Kingdom of Kush, for the last five years.
During this time, the UCL Qatar team has unearthed many exciting archaeological finds, been instrumental in involving the local community at Meroe, and provided dedicated training to Sudanese university graduates. Earlier this year, the team opened the 'UCL Qatar Iron and Kush Information Point', for visitors to learn about the technological history of the area.
"You really start to become part of the local community out here," said Dr. Humphris. "Over the years we've built a 'dig house' for the team. So now, when I'm driving to the village where our site is, it's like coming home. The people living in the area, many of whom work with the project, are like one big extended family."
While Meroe has been known as an ancient iron production center for around 100 years, very little archaeology research had been done in relation to the metallurgical remains until the UCL Qatar project, backed by Qatar Foundation (QF) and Qatar Museums (QM), began excavating in 2012.
"We've found very early iron production at the site as well as later iron works," said Dr. Humphris, who explained that Meroe was the second capital of the Kingdom of Kush, which was a powerful African state from roughly 800BC to 350AD.
When the UCL Qatar team discovered an ancient iron production furnace workshop at Meroe in 2014, it gave rise to the idea of building an Information Point on the site. Dr. Humphris' team built a replica of the furnace workshop next to the biggest iron remains at Meroe.
"We built the furnace and it worked, so we staged the area as if people living at the site 2,000 years ago had just been smelting. We built a shelter over the furnace and hung information panels in Arabic and English providing information about the Kingdom of Kush, the Royal City of Meroe, as well as iron production and its importance. The idea is that people can go there anytime and learn about the site and its important history," she said.
Dr Humphris, who has worked as an Africanist archaeologist with a specialism in iron production for more than 15 years, divides her time between working in the field in Sudan, and in the labs and at her office at UCL Qatar in Education City, Doha.
Like any successful archaeological project, UCL Qatar's Sudan research is dependent on the analysis of samples taken from the site. Through its collaboration with the Sudan National Corporation for Antiquities and Museums in Sudan, as well as generous funding from the Qatar Sudan Archaeology Project, which supports 40 archaeological teams working in Sudan, the team has been able to bring a wide range of samples back to the material science labs in Education City for analysis.
"We've had some really nice object finds, not gold or treasure, but things like a figurine that could have been a child's toy, and huge quantities of pottery that help us to examine what people might have been eating or drinking. I really like finding things that bring the human aspect into the archaeology we're excavating."
Dr. Humphris describes the labs at UCL Qatar as "almost unparalleled" in the region. "The analysis we carry out on samples here allows us to recreate and tell the story of the past. The facilities QF provides are very impressive, and it goes beyond the laboratories. We have the most amazing library at our disposal that covers everything from museums to database management to conservation."
The head of UCL Qatar research in Sudan says she is looking forward to the current 12-week season at Meroe. In terms of plans for season ahead, Dr. Humphris and her team will carry out further excavations at one of the most important temples at Meroe, which was situated by the ancient architects on top of the remains of iron production; and the excavation of one of the earliest buildings ever found at the site, which the team found buried under the vast remains of ancient iron production.
"This building could contain the remains of the earliest furnace ever found at Meroe and would therefore greatly increase our understanding of the origins of iron production, not just at Meroe but perhaps in Africa." Dr. Humphris reveals that the team will also continue to develop the site protection measures they begun in 2016, and to implement various conservation strategies. She also explains she is particularly looking forward to handing out over 1,000 copies of a children's book, designed as an interactive language tool for teaching children about the impressive history of the site.