The Nature of Things unveils Lost Secrets of the Pyramids | TV, eh? 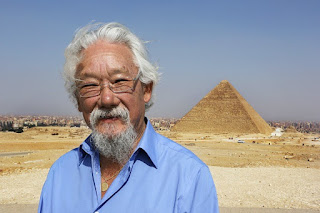 Airing Sunday at 8 p.m. on CBC, David Suzuki travels to Egypt where the desert continues to offer tantalizing clues as to what life at the time of Khufu was like. The Pharoah, who ruled during the fourth dynasty of the Old Kingdom period, commanded his people construct the Great Pyramid. It took 25 years to build and was made of over 2 million stones. When finished, the massive monument to Khufu was a shimmering limestone beacon that could be seen from miles away. But how was it made? New advancements in technology and some key finds have given clues as to how.

"The pyramids are the last of the ancient wonders that are still accessible," says James Hyslop, president of Alibi Entertainment. "The pyramids are real, you can see them, and over 4,000 years of man and nature have failed to blunt their dominance in mythology and culture. The more that we discover about the pyramid, it increases the magnitude and the marvel, scope and scale of what is essentially a death chamber for a king." Alibi Entertainment (The Baker Sisters, Titanic: The New Evidence), along with Windfall Films and Handel Productions are presenting the Canadian-UK production written, directed and produced by Gwyn Williams. 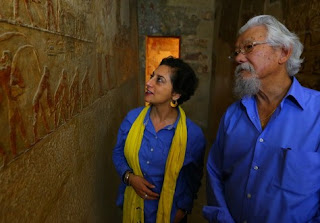 Suzuki, who filmed for five days on the Giza plateau, consults with experts, scientists and archaeologists Mark Lehner and Mohamed Abd El-Maguid in Cairo to uncover how the pyramid was constructed and the massive community that sprang up around it. New evidence—presented via CGI imagery, 3D computer models and drones—recreates an intricate barracks system used to house workers while a support group kept them fed. Suzuki meets with Salima Ikram, professor of Egyptology at the American University in Cairo, who uncovers interesting information recounted on the walls of the home owned by Khufu's high priest, Imery.

Some of the most stunning footage captured in the episode is the discovery of a boat meant to transfer Khufu into the next world. Its simple construction out of wood and rope confirmed boats were used on the Nile at the time and hinted at how the massive stone blocks used to create the Great Pyramid were transported to the build site.

"When the archaeologists and Egyptologists had determined that the boat was held together by rope, the challenge we thought would be really compelling … would be to see if we could recreate or rebuild a boat that was strong enough and seaworthy enough to carry a block of limestone to the site," Hyslop says. "Truthfully, when we dropped it into the water, everybody was concerned if it was going to float, let alone when we put a three-ton block on it."

The Nature of Things' "Lost Secrets of the Pyramid" airs Sunday at 8 p.m. on CBC.