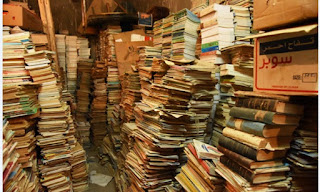 By: Sherif Awad
On a one-way street in Cairo's crowded Faisal neighborhood, archivist Mohamed Sadek sits in his 19th century office surrounded by large volumes of books, ancient cinema projectors and other knickknacks. An antique telephone takes pride of place on his desk, around which Sadek is usually surrounded by his guests: an audience of artists, researchers, intellectuals and collectors like himself.

Over the years Sadek, who was born in the neighborhood of El-Darb El-Ahmar, has managed to secure a number of properties in Faisal to house his large collection of books, magazines, posters and collectibles. He considers his current work not a hobby, but a message he inherited from his grandfather. Back in his grandfather's days, in the early 20th century, collectors like Sadek were referred to as El-Warakeen, or the paper men, who work in everything related to paper. Sadek's family owned a store called Sadek Bookshop on Port Said Street (then called El-Khaleeg El-Masry Street) in El-Sayeda Zeinab neighborhood. As soon as he was old enough, the young Sadek started to take his father's place in the family shop.

But sales of books and magazines were slow and Sadek decided it would be more lucrative to dabble in collecting. Starting in the early 1990s, Sadek has amassed his own archive of magazines, books, pressbooks and posters retracing Egyptian and Arab history, arts and politics. "It was in the aftermath of the 1992 earthquake when I decided to develop my practice from a secondhand salesperson to a collector and archivist," remembers Sadek. "At that time, the Egyptian government needed their officials to get around smoothly in their private cars to reach any crisis location so they decided to kick us out from our usual place near Al-Azhar and move us up the Moqattam mountain, near the entrance of the infamous El-Batneya neighborhood."

Sadek recalls how many intellectuals criticized this evacuation, including novelists and columnists Gamal El-Ghitany and Youssef El-Kaid "until we were resettled near El-Azbakeya Garden in El-Attaba. Once there, I tried to boost sales by attracting pedestrians' attention. Every day I would rearrange my newsstand so it features a thematical variety of history, arts and pop culture," explains Sadek, who gradually found himself becoming a celebrity guest on radio and TV programs. Today many writers come to Sadek or send their assistants seeking archival information for their research—among them bigtime screenwriters Waheed Hamed and Youssef Maaty, to name just a few. Blockbuster celebrities like Adel Imam and Youssra visit Sadek or send helpers to get books and magazines either featuring them few years ago or to research roles.

Sadek has organized many exhibitions both in Egypt and abroad. The most prominent was during the 2014 edition of the Cairo International Film Festival (CIFF) when he exhibited classic posters from the golden era of black and white Egyptian cinema, in addition to pressbooks, lobby stills and even old formats of box office tickets retracing decades in the film industry. Sadek was also invited to the UAE, where he managed to track down publications and photos retelling the 70-year history of the UAE until today.
Sadek also has a great line of customers of film fans and collationers like himself. "My biggest sale was a folio-sized poster of Youssef Chahine's Salah El-Deen (The Conqueror) which I sold to an American guy with a prize of $,1000," reveals Sadek, who says he likes to "sell and buy in the real world."

"I have never been convinced of posting my items on sites like ebay for sales or auctions. You know why? Because it is quite an experience for a customer to come and see and feel the real thing. A photo of an item on the internet could be unreal and deceiving," explains Sadek, adding that he doesn't want to sell online or to digitize his archives like most organizations and individuals do.

Instead, Sadek is optimistic he can continue to track down and document local culture. "I hope I can deal with an Egyptian organization to retrace the history of Egypt like I did in Saudi Arabia and the UAE," he says, calling on authorities to facilitate his efforts in finding spaces to exhibit his memorabilia.

Sadek will be exhibiting again during the next edition of CIFF coming up in November before jetting off to the UAE in December to commemorate National Day.