For the Deseret News 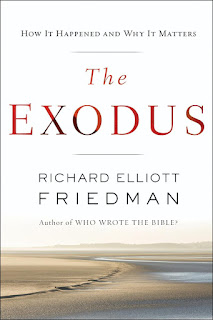 View 2 Items
HarperCollins
Richard Elliott Friedman's latest book is "The Exodus: How It Happened and Why It Matters." He is also the author of 1987's "Who Wrote the Bible?"

"THE EXODUS: How It Happened and Why It Matters," by Richard Elliott Friedman, HarperOne, 304 pages (nf)

Richard Elliott Friedman is a rare creature: a recognized academic authority on the Hebrew Bible (what Christians call the Old Testament) and a skilled translator between scholars and interested lay readers.

His well-known 1987 book "Who Wrote The Bible?"is regarded as one of the clearest explanations of the documentary hypothesis, the notion that the narrative of the first five books of the Hebrew Bible is woven together from several earlier sources. Nearly universally accepted among biblical scholars, the hypothesis explains, for instance, why certain stories in the early books of the Hebrew Bible are told twice, why in various places Noah is commanded to take differing numbers of animals onto the ark, or why God is sometimes referred to as Elohim (the Hebrew word meaning "god") and sometimes as YHWH Elohim (translated in the King James Version as the lord God) and sometimes simply as YHWH. The book was a best-seller and acclaimed by scholars for its clarity as well as the wrinkles Friedman's own research added.

In a conversational style, Friedman summarizes a large collection of work on the historicity of the biblical Exodus, points out what he believes are its deficiencies and advances his own interpretation of what precisely happened on the Sinai.

In the interests of simplicity — and in order to frame his own argument as a reasonable middle way — Friedman perhaps summarizes the scholarly conversation about the Exodus too neatly, but his sketch is fascinating. From early 20th century archaeologists who went looking for evidence of the reality of the Exodus to mid-20th century scholars who concluded that there is no physical evidence for the roughly 2 million people the Book of Exodus says walked out of Egypt, Friedman observes that the event seems left with little tangible support. Friedman, though, believes he can salvage the Exodus through the documentary hypothesis.

He teases apart the somewhat differing ways the various documentary narratives in the books of the Bible describe the Exodus. He confirms the influence of Egyptian culture in early Palestine. He examines the oldest fragments of text in the Bible: the Song of Deborah (in Judges 5) and the Song of Miriam (in Exodus 15) and observes that while Deborah lists 10 Israelite tribes, she does not mention the Levites and that Miriam does not reference Israel as a nation.

The conclusion Friedman draws from all of this is that there was indeed an Exodus from Egypt, but it was far smaller than is generally thought. Indeed, Friedman concludes that those who fled Egypt were those who became the tribe of Levites, a monotheistic people who worshiped the god YHWH and whose name means something like "the joined." Friedman argues that biblical commands to care for foreigners derive from the Levites, and that the documentary hypothesis illustrates the Levites being woven into the story of Abraham's family in Genesis, a document that postdates the Exodus by hundreds of years.

Friedman covers much more evidence than this brief summary can recount; his investigation ranges from DNA evidence to the role of Midian in Moses' life to the archaeological remnants of the ancient tabernacle. To the non-specialist, his argument will be compelling — though Friedman has set up his narrative that way. His prose is sometimes so conversational as to be distracting.

Nonetheless, the book is accessible. Friedman has a strong sense for making his readers understand why academic disputes matter. The book is a valuable exploration not only of the Exodus, but of how scholarly research works.