Will the world end next month?

Here we go again. The clues are "written on the pyramids." Obviously these people read from the same book of facts as Donald Trump.


Will the world end next month? 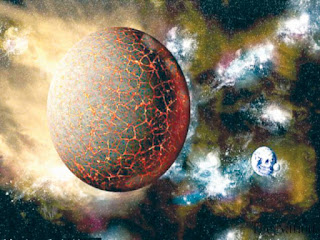 LONDON -  Conspiracy theorists are yet again convinced that the mysterious plant Nibiru is set to destroy Earth in the coming weeks.

Nibiru was supposed to eradicate Earth on September 23 after a Christian numerologist claimed it was on a collision path with our planet.

The doomsday prediction drew enough media attention that Nasa was forced to publicly refute the claims.

Now, conspiracy theorists are claiming Nibiru will generate a devastating series of earthquakes on November 19 that will annihilate all life on Earth.

Nibiru, sometimes referred to as Planet X, is a hypothesised planet on the edge of the solar system that orbits the sun every 3,600 years.

Conspiracy theorists believe the gravitational influence of Nibiru disrupted the orbits of other planets in the solar system hundreds of years ago as the object ringed the sun.

They claim the next disruptive passage could happen at any time, with the planet predicted to either collide directly with Earth or trigger apocalyptic weather patterns across its surface.

The planet has been the focus of a host of conspiracy theories over the past twenty years, and the latest rumours originated from Planetxnews.com.

A team of conspiracy theorists behind the site followed the growing number of earthquakes and volcanic eruptions that have hit Earth in the last few months. They claim the disasters were caused by the gravitational pull of Nibiru and that their frequency has risen as the planet's path brings it closer to Earth.

'The predicted backside alignment quake event is scheduled for November 19, 2017, when the Earth passes behind the sun relative to the Black Star [Nibiru].' he told the Express. Back in September, Nasa was forced to publicly state that Nibiru did not exist in an attempt to quell doomsday fears. 'The planet in question, Nibiru, doesn't exist,' the space agency said in a statement.

'Nibiru and other stories about wayward planets are an internet hoax. There is no factual basis for these claims.'

'If Nibiru or Planet X were real and headed for an encounter with the Earth astronomers would have been tracking it for at least the past decade, and it would be visible by now to the naked eye.

'Obviously, it does not exist.'

After Nasa's predictions rang true when the apocalypse didn't come on September 23, 'Christian numerologist' David Meade, who first claimed Nibiru was on its way in a series of YouTube posts, clarified his story.

Mr Meade, who also writes for Planetxnews, said that the apocalypse has in fact been delayed, and was never predicted to arrive on September 23.

Speaking to the Washington Post, Mr Meade said the date only marks the beginning of the end of times.

'The world is not ending, but the world as we know it is ending,' he said.

Mr Meade used the 'biblically significant' number 33 and his interpretation of the Bible's Book of Revelation to suggest that the legendary - and widely debunked - planet Nibiru would strike Earth on September 23.

The impact would set in motion cataclysmic events, according to Mr Meade.

In late August, Meade said that 'Nibiru' would hit Earth between September 20 and 23.

He said the clues are written on the Pyramids of Ancient Egypt and in the Bible.

The conspirator said: 'It is very strange indeed that both the Great Sign of Revelation 12 and the Great Pyramid of Giza both point us to one precise moment in time – September 20 to 23, 2017.

'Is this the end of the Church Age and the transition to the Day of the Lord?

'There couldn't be two greater witnesses.'

Despite a lack of evidence for the hidden world, which Nasa has previously stated is an 'internet hoax', many people believe it is real.

The scientific community has repeatedly asserted that Nibiru does not exist.