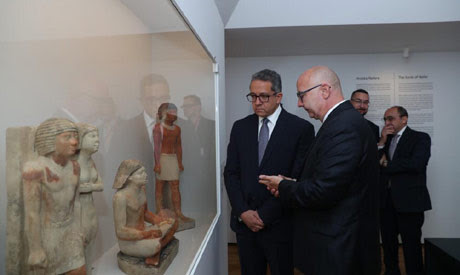 A few hours before the official opening of the 'Kings of the Sun' exhibition in Prague, Egypt's Minister of Tourism and Antiquities Khaled El-Enany embarked on an inspection tour at the exhibition followed by a press conference at the National Museum.

During the tour, El-Enany praised the design of the exhibition and the use of modern technology to explain details about each piece, which gives visitors comprehensive information about each object on display.

"I am very proud of all the effort exerted to organise this exceptional exhibition during the exceptional time the world is going through," El-Enany told reporters at the press conference, adding that "this exhibition proves that we are stronger than COVID-19 because we were able to make this exhibition to come true."

He highlighted that the preparations for the exhibition began about five years ago and that this is the first Egyptian archaeological exhibition sent to the Czech Republic.

El-Enany pointed out that the pieces on display had never left Egypt before, and that they will be sent to the Grand Egyptian Museum in Giza after the exhibition concludes in February 2021.

El-Wnany said that he believes the exhibition will attract a large number of visitors, not only from the Czech Republic, but from neighbouring countries as well, which will encourage them to visit Egypt to see its ancient civilisation as well as enjoy its beautiful beaches, bright sun and warm weather.

According to organisers, he said, the exhibition is expected to receive more than 300,000 visitors.

Merslav Barta, rector of Charles University, said that the exhibition is a look back in time to the era of the pyramid builders, and that the artefacts on display were discovered by a Czech archaeological mission in Egypt's Abusir.

He asserted that the exhibition is significant because it is the first Egyptian archaeological exhibition held in Prague, and that it is taking place amid the coronavirus pandemic. Barta described the exhibition as a dream come true.

The opening of the exhibition coincides with the celebration of the 60th anniversary of the start of Czech archaeological work in Egypt.

The exhibition is displaying 90 artefacts unearthed in excavations conducted by the Czech mission in Abusir.

Among the most valuable items on display is a basalt statue of King Raneferef, carved around the year 2460 BC, alongside other objects and statues from the Old Kingdom. 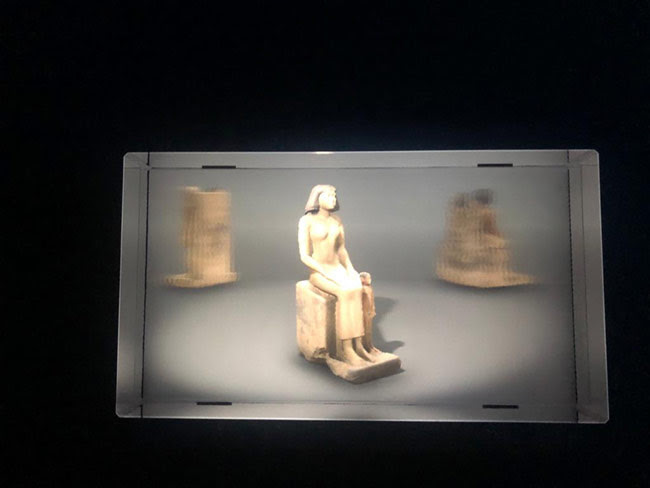 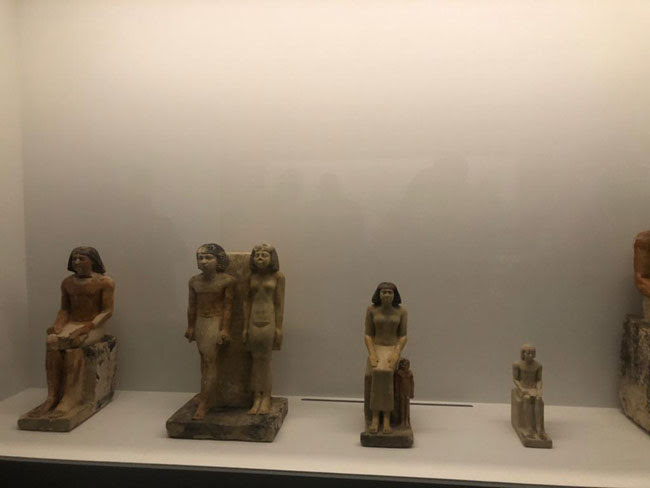 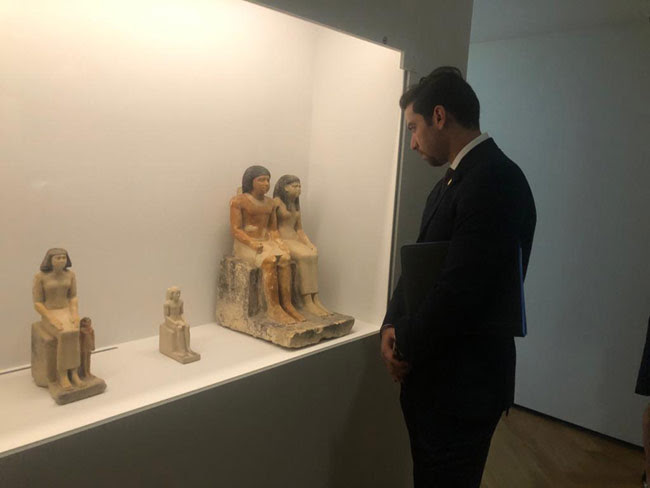 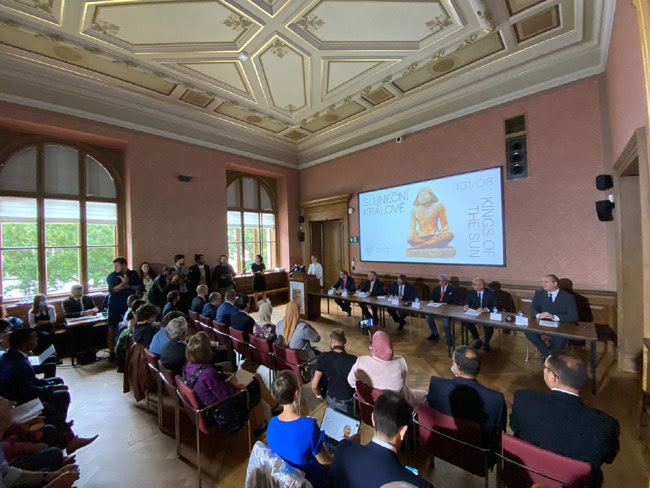 Nobody knew how to read hieroglyphs when two 19th-century scholars set out to decipher the inscribed texts on the ancient Egyptian Rosetta Stone, one of the British Museum's most famous treasures.

Now notes have been discovered among one of the scholars' papers in the British Library that reveal the extent to which the translation was treated as though it was a mathematical problem.

Thomas Young, an English medical doctor, and his rival, Jean-François Champollion, a French historian and linguist, each struggled to unravel the extraordinary puzzle, which eventually revealed a lost world through its language.

Young's notes were among his papers donated 200 years ago by his widow and show how he approached the challenge.

The Rosetta Stone was inscribed in three languages in 196BC during the Ptolemaic dynasty: hieroglyphs, the formal writing system; demotic, the Egyptian script used for daily purposes; and Ancient Greek, the language of the administration at a time when the rulers of Egypt were Greco-Macedonian after Alexander the Great's conquest.

Young could read Ancient Greek and spent his six-week summer holiday in Worthing in 1814 cutting up individual lines into strips, attempting to match them with corresponding versions. The notes show that he was arranging and rearranging the pieces.

Jed Buchwald, a professor of history at the California Institute of Technology (Caltech), came across the notes when studying Young's archive at the British Library.

He told the Guardian: "I was astonished. Egyptian hieroglyphs has been written about more than anything else in ancient history. I thought, how's it possible that nobody's written about or used this material? I knew that his wife had handed things over. I expected just to find some letters. But I didn't expect to find such extensive notes. They've been sitting there for two centuries.

"Every page is dated. You can almost imagine him sitting there in Worthing, looking out at a beach when he's cutting these hieroglyphs."

He added that, while previous scholars had seen the material, its significance had been overlooked: "It gives you a clear picture of the almost mathematical cast of mind that he had when he was faced with these obscure signs. He went into those things literally as though it was a mathematical problem."

The Rosetta inscription – which is broken and incomplete – features 14 lines of hieroglyphic script. Its text is a decree passed by a council of priests affirming the royal cult of the 13-year-old Ptolemy V on the first anniversary of his coronation in 196BC.

After the end of the fourth century AD, hieroglyphs had gone out of use, along with the knowledge of how to read and write them. It was Champollion who realised that hieroglyphs recorded the sound of the Egyptian language and who pieced together the alphabet.

The discovery of Young's notes will be included in a forthcoming scholarly book, co-written with Diane Greco Josefowicz. Titled The Riddle of the Rosetta: How an English Polymath and a French Polyglot Discovered the Meaning of Egyptian Hieroglyphs, it will be published by Princeton University Press next month.

Josefowicz said: "When we think of the Rosetta Stone, we often imagine the decipherment as a code-cracking activity. Young's Worthing materials show him attacking the problem as if it were a puzzle. But he doesn't get very far. Champollion, in contrast, was more deeply versed in the history and culture of ancient Egypt, and this broader and more culturally sensitive approach reaped dividends for him."

Champollion developed and refined the idea that the scripts were non-phonetics in a series of talks that he wrote up and delivered in the 1820s. One of them, on demotic, was never published. The authors found the manuscript in the Champollion archive in Paris. Using these materials, they were able to trace the path to his understanding of the nature of the ancient Egyptian scripts.

In the book, Buchwald writes: "We are, of course, acutely aware of the risks of adding yet another volume to the already extensive literature on the reading of the ancient Egyptian scripts. However, no published account has made full use of unpublished manuscript sources, and this alone provides sufficient reason for a fresh treatment."

Ilona Regulski, the British Museum's curator of Egyptian written culture, said: "Anything that helps us understand better that early development of decipherment is interesting."