by Elaine A. Sullivan

The long-lived burial site of Saqqara, Egypt, has been studied for more than a century. But the site we visit today is a palimpsest, the result of thousands of years of change, both architectural and environmental. Elaine A. Sullivan uses 3D technologies to peel away the layers of history at the site, revealing how changes to sight lines, skylines, and vistas at different periods of Saqqara's millennia-long use influenced sacred ceremonies and ritual meaning at the necropolis.

The author considers not just individual buildings, but re-contextualizes built spaces within the larger ancient landscape, engaging in materially-focused investigations of how monuments shape community memories and a culturally-specific sense of place. Despite our modern impression of the permanent and enduring nature of the site, this publication instead highlights that the monuments and their meanings were fluid, as the Egyptians modified, abandoned, resurrected, forgot, or incorporated them into new contexts. Virtually placing the reader within a series of landscapes no longer possible to experience, the author flips the top-down view prevalent in archeology to a more human-centered perspective, focusing on the dynamic evolution of an ancient site that is typically viewed as static.

Elaine A. Sullivan is Associate Professor of History at the University of California, Santa Cruz. 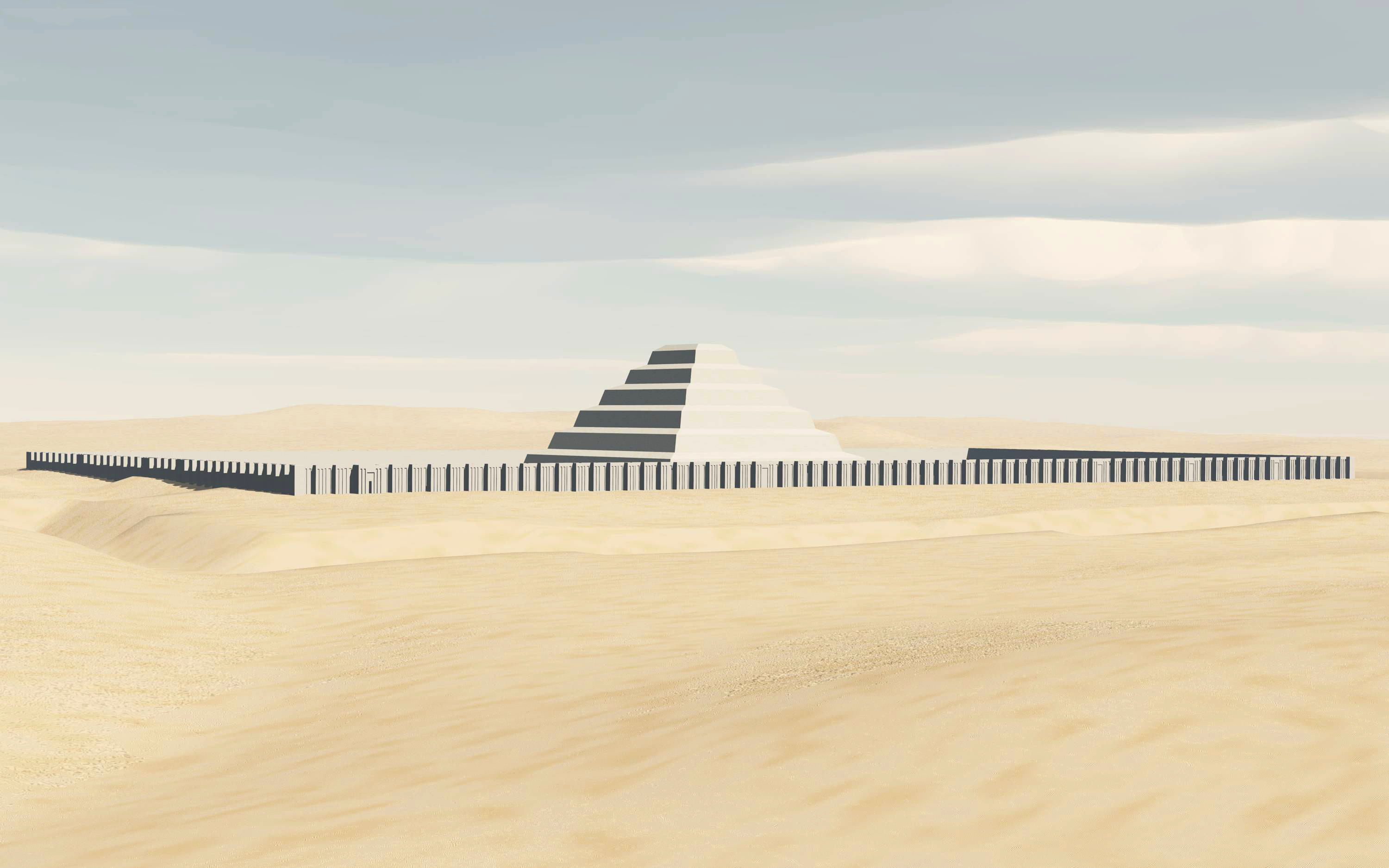 The ancient Egyptian necropolis of Saqqara is a designated UNESCO World Heritage Site, the location of the first monumental stone structure in the world, and one of Egypt's most popular tourist destinations, visited by some twenty thousand visitors a week before the 2011 Egyptian Revolution.1 Despite more than a century of intense archaeological excavation and the importance of the site for political, religious, and architectural history, Saqqara has never been the sole focus of a major synthetic landscape study. This is a result, firstly, of the denuded nature of the site, as the superstructures of many of the monuments have collapsed, suffered purposeful destruction, or disappeared under more than 2000 years of sand drifting in from the western desert. These monuments, some of them originally many meters in height, do not today represent their visual or spatial impact at a given time in the past. Second, the long history of the site actually complicates landscape studies. Many elements of the original form of the ancient space are difficult to examine in the field today, as the patchwork pattern of development at Saqqara (which was in use for more than 3000 years) means that the structure of the site at any given chronological moment has been obscured by later (but still ancient) changes at the cemetery.

Many ancient societies assigned non-economic value to the landscapes they inhabited; places were ascribed special meaning, constructed to enhance (or interpreted as possessing) religious and communal significance.2 Constructing the Sacred addresses the sacred landscape of Saqqara from a unique perspective, using advanced 3D technologies to examine questions of development at this complex, multiperiod archaeological site. Using a 3D Geographical Information System (GIS) reconstruction model of the necropolis covering the Pharaonic Period (Dynasties 1–30, 2950–343 BCE), this work digitally peels away layers of later construction and considers each phase of the cemetery in isolation, demonstrating how 3D modeling allows archaeologists to approach a series of now-disappeared landscapes. For the first time, there is a clear means of accessing and evaluating the specific choices made by the ancient Egyptians in constructing the ritual landscape through monumental architecture. In examining the site of Saqqara and its surroundings at distinct time periods, this publication explores how concepts of sacred space were reinvented as the built and natural landscape changed, creating new meanings as individuals and communities reimagined the form and use of the site over time.

I contend that, at Saqqara, visibility was an important but as yet undertheorized aspect of royal and elite sacred landscape production. Monument visibility played a key role in the formation and organization of Saqqara, and the visual environment of the necropolis was intentionally crafted at each moment to express current royal or elite political and religious views. Egyptian kings and high elites intentionally shaped the monumental form and placement of their tombs in order to increase their prominence, connect them visually with other ritual places, or hide them from view. The importance of visibility at the cemetery was related to emic Egyptian concepts of the ritualized power of sight, which could create powerful and effective relationships between the deceased, the king, and the gods.

While architectural monumentality and engineered aspects of visibility and experience were critical to forming a funerary landscape demarcated from both near and far and set apart as sacred at Saqqara, it was just one of a series of strategies adopted by the royals and high elites in creating sacred funerary landscapes in the Pharaonic Period. In the larger work, I contextualize strategies of landscape intervention at Saqqara as parallel to those used at other royal and high elite funerary sites in the Nile valley. I identify a consistent practice of sacred landscape creation across multiple locations and suggest that these practices inscribed royal and elite hierarchies directly into the funerary space. Such strategies included connecting disparate sacred zones into networks through ritual movement, incorporating multiple sites into larger cosmic landscapes, and adapting characteristic aspects of the local natural environment into ritual service through religious metaphor. These methods are in evidence at a number of royal funerary sites like Abydos, Amarna, Giza, and Thebes. While employing consistent practices of sacred landscape formation always contributed to reinforcing state hierarchies, comparing techniques used at Saqqara and other sites shows that such tactics were also selectively employed to create regionally specific, unique spaces that reflected local interests and traditions. Offering a close examination of the important site of Saqqara, this publication thus contributes to the larger discussion of the creation and perpetuation of sacred space in Egypt, critically examining how visibility, historical architecture, natural forms, and religious ideology were all purposefully combined to produce ritual spaces at necropolises across the Nile valley.

Begin with "Exploring an Ancient Site with a 3D Model"

Posted by Glenn Meyer at 1:08 PM No comments: 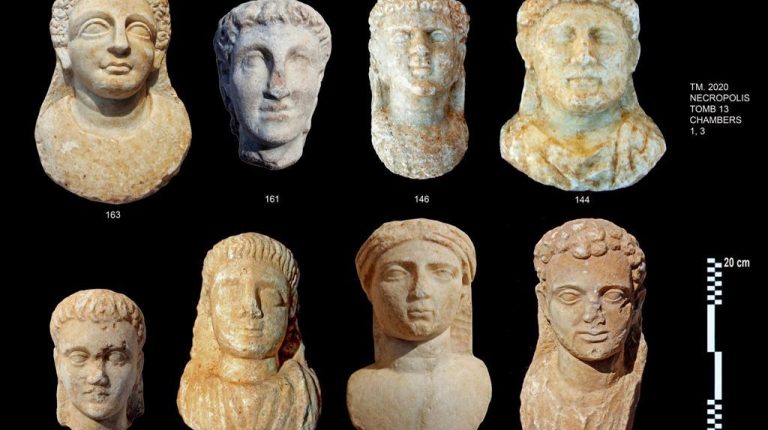 A joint Egyptian-Dominican mission has announced the discovery of 16 burials in rock-cut tombs, or burial shafts, at the Temple of Taposiris Magna, west of Alexandria, Egypt.

The mission, headed by lawyer and archaeologist Kathleen Martinez, features experts from the University of Santo Domingo.

The type of rock-cut tombs discovered were popular in Egypt's Greco-Roman era.  A number of mummies were discovered in the shafts, although they are reportedly in a poor state of preservation.

The mummies feature the characteristics of mummification in the Greco-Roman era, and were found with the remnants of gilded sarcophagi, in addition to gold foil amulets. The latter were shaped in the form of a tongue, and placed in the mouth of the mummy in a special ritual to ensure their ability to speak before the Osirian court in the afterlife.

Martinez said that among the most important of these mummies were two that preserved the remains of scrolls and parts of the sarcophagi. The first was found with the remains of gilded decorations showing the Ancient Egyptian god Osiris, the god of the afterlife.

The other mummy was discovered wearing a crown decorated with horns, and the cobra snake at the forehead. The chest of the mummy shows a gilded decoration representing the wide necklace from which hangs the head of a falcon, the symbol of the ancient god Horus.

Khaled Abo El Hamd, Director General of the antiquities authority in Alexandria, said that during this season the mission made a number of archaeological discoveries. The most important of these were: a funeral mask for a woman; eight golden flakes representing the leaves of a golden wreath; and eight masks of marble dating back to the Greek and Roman eras.

Abo El Hamd noted that the masks, which depict the facial features of their owners, show high craftsmanship in sculpture.

In the last 10 years, the mission has found several important archaeological finds that have changed our perception of the Temple of Taposiris Magna.

A number of coins bearing the name and image of Queen Cleopatra VII were found inside the temple walls, in addition to many parts of statues. The temple grounds were found adorned in the past to reveal the temple foundation panels, which prove that it was built by King Ptolemy IV.

Posted by Glenn Meyer at 9:31 PM No comments:

Posted by Glenn Meyer at 9:45 AM No comments: