Happy Halloween to our mission members, sponsors and friends! The South Asasif conservation Project is preparing for 2018 and looking forward to a great season. Meanwhile, we're in the mood to have some fun and celebrate with our own Katherine Blakeney, who is preparing to launch her new blog, Stardigger's Treasure Trove.

Check out the teaser post "Mummy Love: Cleopatra as Cinema's First Mummy" below:

Halloween is my favorite day of the year and I spend most of October preparing to celebrate this glorious day of darkness, monstrousness and decay. Hoping to scare my friends into the holiday mood I planned to make this post as bloodcurdling as I possibly could. And what better way to scare an archaeology lover than with a thoroughly terrifying mummy? 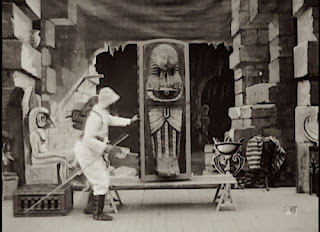 So far so good. Now, to choose the right one. The phantom of Boris Karloff comes to mind at once, but I suspect he is all too familiar to you already. To scare you properly I resolved to delve into uncharted waters, into my favorite era in cinema history – silent film. Considering that the earliest known film featuring the character of an Ancient Egyptian mummy was made in 1899, I had a lot of resin-stained bandages to wade through in search of my silent horror monster.

To my great regret, all I brought back from my journey into the afterlife was a flock of mummified damsels in distress. I apologize, but it is my lamentable obligation to present you with a parade of fair Victorian maidens clad in fashionably draped bandages. I can only assume that with all the glamorous dinners in Egyptian tombs and mummy unwrapping parties held at the turn of the 20th century, mummy bandages were seen as rather alluring. 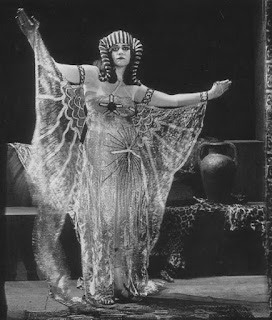 Theda Bara as Cleopatra in Cleopatra (Edwards, 1917). Not technically a mummy, but a vivid depiction of the exotically sensuous ancient Egyptian female as depicted in many films of the 1910s and 20s.

That first cinematic mummy of 1899 graced a humorous trick film called Cleopatra's Tomb, directed by French illusionist and special effects pioneer Georges Méliès. It centers around a seductive female mummy reanimated by a prying archeologist who loses no time in falling for the "monster" he has unleashed. Perhaps a horror story in the making, but there's no sign the film had a sequel. From this early cinematic experiment until the mid-1920s, around twenty films were made with titles containing the keyword "mummy." I'm rather partial to Romance of the Mummy, Mummy Love and The Eyes of the Mummy. The Live Mummy and The Missing Mummy aren't bad either. The above number includes the United States, United Kingdom and France alone, roughly translating to 2-3 mummy-themed films a year (all referring to a preserved ancient body rather than a maternal parent). Many of these films are unfortunately lost and we have no way of knowing how many more were burned in studio backlots to make way for newer and more fashionable films. Incidentally, burnt celluloid was once widely used by conservators of Egyptian art as a solidifying protective varnish. I suppose we know what really happened to all those unwanted mummy movies. How's that for a horror story?

But what about lumbering revenants slinking out of sarcophagi in the night, muttering ancient curses under their breaths as their embalmed fingers crush the tracheas of solid modern citizens? Ask Boris Karloff. 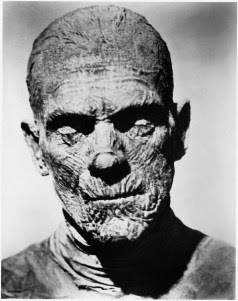 The familiar image of the vindictive monster-mummy as seen in the popular The Mummy franchise (1999-2008), didn't come into its own until Karloff's Imhotep in the 1932 horror classic The Mummy. Most of the mummies of the Silent Era, as seen in films such as 1911's The Mummy or the 1918 German film Die Augen der Mumie Ma (Eyes of the Mummy Ma), are not vengeful killers, but rather exotic ingénues in search of rescue at the hands of a strong and silent archaeologist. These films have little or no connection to the horror genre as we know it today, traversing the spectrum from comedy to romance. A lighthearted approach to a macabre subject and a reflection of contemporaneous perceptions of archaeological finds and archaeologists themselves.

Even an ominously titled film like 1903's The Monster (another Méliès short), is really a farcical love story about an Egyptian prince who resorts to dark magic to resurrect his mummified lover. (I encourage you to consider the results by clicking the link included at the end of this post before you attempt this at home.) 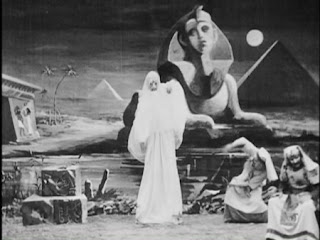 Overall, the resurrected mummy of the early 1900s and 1910s brings to mind Théophile Gautier's 1840 short story, "The Mummy's Foot" rather than the costume rack at your local pharmacy. Gautier's mummy, who comes to collect her stolen foot from a Parisian antiques collector, is not a psychopathic priest but a beautiful princess. She uses charm and bargaining skills rather than violence to achieve her aim, bartering her mummified foot for a statuette. The story is humorous, but it also presents the mummy as mysterious, desirable and ultimately benevolent. Thanhouser Company Films' The Mummy (1911) also centers around a mummified Egyptian princess stranded in the midst of modern society. Revived by an electric current, she instantly forms romantic designs on a young Egyptologist – greatly vexing his fiancee. There are no ancient curses here, and the story ends not with a battle but with a wedding as the amorous princess finds a widowed professor to marry – a fortunate solution for all involved. 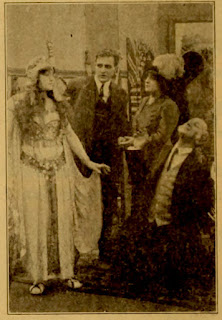 Eyes of the Mummy Ma (Lubitsch, 1918) injects additional drama into the ubiquitous tale of the undead singleton. This entry features a villainous Egyptian hypnotist (Emil Jannings) forcing a living maiden (Pola Negri) to impersonate the eponymous mummy. In a not-so-shocking twist she is rescued by a heroic European painter who brings her home with him to be his muse. The film celebrates her exotic allure while at the same time hinting that she's far better off in the care of civilized Europeans. It's all very well being a rescued mummy, as long as you don't get your bandages caught in the teapot while entertaining guests. 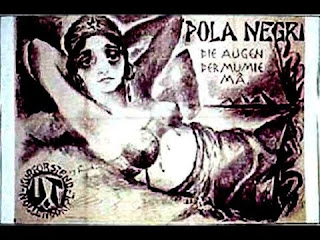 This post hasn't gone at all the way I envisioned. Instead of making you scream and run, my ferocious cinematic mummies pine for your love and attention, painting lovely watercolors as they wait for the right archaeologist to come along. Perhaps this is a terrifying prospect after all?

If you'd like to adopt a mummy this holiday season you can take your pick by exploring the links I've collected below, leading to preserved and restored silent films where possible or to stills from those that became conservation materials.