Dress like an Egyptian! Rihanna poses in semi-sheer foil dress and reptile print jacket as she pays homage to Queen Nefertiti for Vogue Arabia

By Kayleigh Giles For Mailonline

Rihanna has proven her reign as one of the world's most stylish women is far from over as she wows on the cover of Vogue Arabia.

The 29-year-old star channels Queen Nefertiti, one of Egypt's most-celebrated figures, in the incredible new shoot, which is shot by Greg Kadel.

The Love on the Brain hitmaker models a striking reptile print jacket, as well as Nefertiti's iconic blue headpiece. 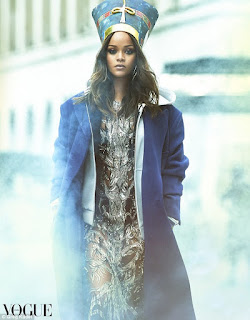 So Vogue! Rihanna proved her reign as one of the world's most stylish women is far from over as she wowed on the cover of Vogue Arabia

Opting for full-out drama, Rihanna sports bold blue eye-make up and a shimmering baby pink lipstick as she strikes a pose for the camera.

Other images depict the beauty in a semi-sheer embellished dress, which is paired with a sophisticated blue coat.

Injecting the ensemble with a taste of her signature urban style, the chart-topper also layers a grey hoodie between the glamorous two pieces.

The shoot was no doubt inspired by the singer's tattoo of Nefertiti, who ruled Egypt alongside her husband Pharaoh Akhenaten, almost 3,500 years ago. 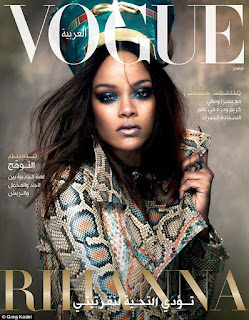 Take a Bow! The 29-year-old star channels Queen Nefertiti, one of Egypt's most-celebrated figures, in the incredible new shoot, which is shot by Greg Kadel

Despite her reign dating back thousands of years, Neferneferuaten Nefertiti remains one of the Middle East's most beloved icons. Adored: Neferneferuaten Nefertiti remains one of the Middle East's most beloved icons

Known for her unmatched beauty, the queen had a very active role in the country's political sphere, giving mankind an early lesson in women empowerment.

Although her death is still shrouded in mystery, the myth of Nefertiti took on a new dimension at the beginning of the 20th century, when German Egyptologist Ludwig Borchardt and his team discovered a painted limestone bust of the royal in Amarna.

It was found in the ruins of workshop of court sculptor Thutmose, and was described by Borchardt as "the most alive Egyptian artwork."

Speaking about the exciting shoot, Vogue Arabia editor Manuel Arnaut said: 'We are dedicating the issue to strong and dynamic women who are changing the world.

'Rihanna, our cover star, is one of them. Not only is she one of the most successful pop icons ever, shaping the entertainment industry with her powerful tunes and unique sense of style, she is also an advocate for diversity.

'With a crown designed by Faeth Millinery, Rihanna pays homage to this unforgettable queen, who still reigns as one of Ancient Egypt's most celebrated figures.'

See the full shoot in the November issue of Vogue Arabia, on sale 1st November. 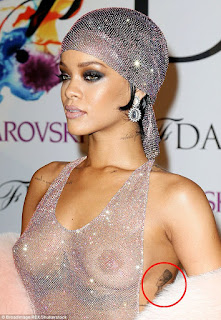 Tat's right! The shoot was no doubt inspired by the singer's tattoo of Nefertiti