There is no room for speculation in the field of Egyptology without strong archaeological evidence, including in the story of Moses and the Exodus, writes Mohamed Abdel-Maksoud 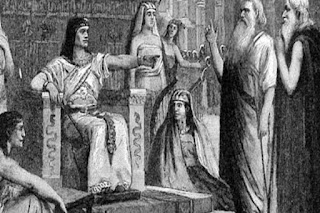 
Biblical scholars have engaged in intense debates on the subject, ignoring at times certain historical details in order to reach their conclusions. These scholars have been divided into two groups: one group says that the Bible should be the only source of information on the subject, while the other looks to ancient archaeology in order to date the Exodus. One of the points argued about is that the Bible mentions that Moses saw the rule of two Pharaohs, while the Quran mentions the presence of only one, the one who died during the pursuit of the Children of Israel out of Egypt.
Until 3150 BCE, ie during the First Dynasty, the title of Pharaoh was not used. The word refers to a monarch and derives from the ancient Egyptian words meaning "great house". It was not until the rule of Thutmosis III in 1425 BCE during the New Kingdom, after the reign of the Hyksos, that the word Pharaoh became the form of address for a king. However, the word was originally pronounced barao, changed in Hebrew to pharao, before adding the "n" sound in Arabic to become pharaon in Arabic or pharaoh in English.
The main problem in identifying the Pharaoh during the time of Moses, however, is the result of different chronologies. Scholars use different points of reference that place the Exodus two centuries apart.
Most archaeologists believe that the Exodus took place during the reign of Ramses II, basing their opinion on the name of the city called Ramses, built by the Israelites and given the name of its then ruler or Pharaoh, according to the Bible, and later changed before the rule of Pharaoh Mereneptah. The archaeologists deduce that the Exodus had to have happened during the rule of Ramses II.

The problem with this account is that it contradicts the Biblical verse that states that the Exodus took place 480 years prior to the building of Jerusalem's first temple during the rule of king Solomon. The latter's son, Pharaoh Sheshonk, invaded Jerusalem, placing the time of the Exodus during the rule of Thutmosis III.
In Egypt, the debate has resurfaced because of statements made by Saadeddin Al-Hilali, a professor of Islamic jurisprudence at Al-Azhar University in Cairo. Al-Hilali is not an expert on historical or archaeological subjects, but he has said that he has identified the name of the Pharaoh who ruled during the time of Moses. He has done so, he claims, through reading three old books: Basaar Dhawi Al-Tameez fi Lataef Al-Ketab Al-Aziz by Magdeddin Al-Fayrouz Al-Abadi; Lesan Al-Arab by Ibn Mandhour Al-Ansari; and Al-Misbah Al-Mounir by Ahmed Al-Fayoumi.

Al-Hilali concludes that the Pharaoh who ruled at that time was not Egyptian. Instead, he came from Khurasan, a region located between Iran and Afghanistan. In ancient times the area extended from the Oxus River to the Caspian Sea in the west, the borders of the central Iranian deserts in the south, and the mountains of central Afghanistan in the east. Located in the region called the Land of the Sunrise, Khurasan was the most eastern city in the ancient Persian Empire.
The Al-Azhar professor thinks that the name of the Biblical Pharaoh was either Mosaab bin Al-Walid or Walid bin Rayan.
However, many Egyptologists have argued against Al-Hilali's claim. Prior to his making it, an Islamic scholar at Dar Al-Iftaa, the Islamic Law institute in Cairo, told the media that it was Ramses II who had ruled during the time of Moses. Much like Al-Hilali, this scholar was not an expert on history or archaeology, and he failed to present scientific evidence supporting his claim.
Earlier this year, Sudanese Minister of Information Ahmed Bilal said that the Pharaoh mentioned in the Quran was Sudanese. He recalled the part of Moses' story which recounts "rivers flowing from underneath", saying that Sudan has many rivers, while Egypt has only one. In 2015, Bilal said that "the point where the two seas meet", mentioned in the Quran, is the city of Mogran, today's Khartoum. This was the place where Moses learned wisdom and met the "good man" on Tuti Island, Bilal said. Elders in Tuti say there is a rock on the island which they visit to receive blessings.
It is worth mentioning that Bilal has decried on a number of occasions the media's neglect and underestimates of the importance of Sudan's pyramids and monuments.
Others who claim that Moses was Sudanese include Abdel-Kader Abu Qaroun, who has written that north Sudan was the homeland of Moses. Another writer, Mokhtar Abdel-Salam, says that Sudan was the land of the prophets, including Moses. Last year, head of the Luxor Monuments Authority Mustafa Waziri told the media that the Pharaoh came from the city of Aseer lying to the west of the Arabian Peninsula.
However, all these opinions contradict the holy books, which say that the Pharaoh was Egyptian. The Old and New Testaments of the Bible can be regarded as historical references in this regard. The Bible relates the history of Jews giving specific dates and lists family trees and numbers of soldiers. The Bible is also a history book, unlike the Quran, which adopts a preaching style. The Quran mostly does not list dates or places. The Quran preaches, and the Bible records history.

The Jewish Torah and the Quran describe the Pharaoh who ruled during the time of Moses as being arrogant, tyrannical and wanting to claim divinity. These features are only mentioned when the holy books describe the Pharaoh of the Exodus.
It thus appears that because no documents or artefacts have been released in Egypt identifying the Pharaoh of the Exodus, the issue has been left in the hands of speculators who have made such claims as the Pharaoh was from Sudan, today's Saudi Arabia or Khurasan.
Nevertheless, scholars and experts who try to deduce the identity of the Pharaoh of the Exodus limit their results to a choice between Thutmosis III, Ramses II and Mereneptah. It is important to note, however, that archaeological discoveries have not supported any of these theories.
Identifying the Pharaoh of the Exodus is not the only difficulty. Many questions surround the Exodus, including how it happened and what exactly took place when the Pharaoh of the Exodus and his army drowned while chasing Moses and his people out of Egypt.
Due to the lack of archaeological evidence on the Exodus, some scientists have attempted to establish a link between the ancient eruption of the volcano on the Greek island of Santorini and ecological changes in the Mediterranean Sea. These changes have become known as the "first tsunami" and branded an ancient environmental catastrophe in the Mediterranean. The Egyptian Delta was immensely affected, to the point that its eastern part was completely flooded. The strong tide also affected not only the Delta, but North Sinai and Port Said, negatively affecting the archaeological sites in the area and drowning entire sites.

Scientists have concluded that volcanic remnants found in the Delta have been there since the rule of Thutmosis III and the end of the Hyksos Era in Egypt around the beginning of the New Kingdom's 18th Dynasty. These events have led them to relate the date when the volcano erupted and Moses' Exodus from Egypt and the drowning of the Pharaoh and his army on the shores of the Delta.
However, this scenario contradicts the accounts given in the holy books. Overall, relying on the latter without strong archaeological evidence about the Pharaoh, Moses and the Exodus is not enough. More research and field work are needed to unravel what really happened.

The writer is former secretary-general of the Supreme Council of Antiquities.