The Coptic era: The bridge between the pharaonic and the Islamic - Books - Ahram Online

The Coptic era: The bridge between the pharaonic and the Islamic 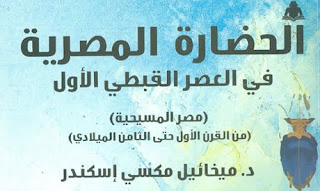 The first few centuries of the common era in the history of Egypt, in particular from the first century to the eighth century AD, were for a long time unspoken of except in academic circles, or if they were spoken of, not much light was shed on them in proportion to their importance. The book's author, Mikhail Maknisi Iskander, has called this period the first Coptic era.

This period witnessed grave events in which the ancient Egyptian civilisation was vanquished and Egypt suffered a series of successive invasions, such as the Persian invasion, then the Macedonian Greek invasion and the Ptolemaic rule after Alexander the Great's demise, then Roman rule until the Arab conquest in 640 AD.

This period spans from the mid-first century AD, when Christianity reached Alexandria, until the Arabs entered Egypt. Iskander examines this period and the extent of its decisive impact on subsequent eras.

Perhaps what draws attention in the books that the author relied on as sources is that most of them were written by Muslim writers, historians and academics, who studied the Coptic era's details and brought to light what this era has contributed not only to Egypt but to human civilisation.

They also asserted that the Coptic component was an essential component within the extended Egyptian civilisation, like the ncient Egyptian (pharaonic) and the Islamic components.

Among those the author cites as historian authorities is Dr. Abdel-Wahab Bakr, who, for instance, asserted that "dropping a period that covers six hundred years from Egypt's history (40 AD – 640 AD) makes the Egyptian history curriculum crooked and flawed; the Coptic era must be taught because it is a part of the nation's history."

"History is about inter-connections and failing to study one link leads to not understanding the previous and the subsequent ones," he wrote.

Another researcher, Dr. Raafat Abdel-Hamid, refuses to view the Coptic era as the late Roman era or the early Byzantine just because those empires were occupying the country.

According to Abdel-Hamid, Egypt was only a granary to those empires, while the literature, arts, architecture and music and the spiritual side was a wholly Egyptian creation. It is established, for instance, that monasticism and faith was purely an Egyptian invention.

Dr. Zubaida Mohammed Atta maintains that: "the Coptic era isn't just events that passed and ended; rather it is a living heritage, extended, continuing and pulsating with movement and life."

Dr. Mahmoud Medhat writes that "the history of Coptic Egypt is long and great. The invaders tried to efface it and keep it away from the minds of Egypt's sons lest other Egyptian revolutions through time be known, and to cut off the links between Egypt's sons and their history."

Eminent historian Mohamed Shafik Ghorbal, he points out that Coptic Art and its styles was one of the influential factors on the arts of Islamic Egypt. This should be considered another piece of evidence of the importance of the Christian era in the formation of Egypt.

In the same context, Dr. Zaki Mohamed Hassan, former curator of the Arab Antiquities House, writes that "the Arabs found thriving Coptic arts. Hence, they fulfilled their requirements and the building styles they needed by recourse to Egyptian Coptic art."

The first part of Iskander's book looks at the inhabitants of Egypt during this period, the language, the Nile, and intellectual and cultural life.

The author describes the period as "the bridge" over which history passed, connecting ancient Egyptian civilisation and the Coptic era until the Arab Conquest.

In the second part, he tackles the development of education and different kinds of knowledge, such as the way to calculate time, the annual calendar and medical treatment. He concluded his third part with a brief summary of the history of Coptic art and architecture.

On a final note, despite the wealth of information, in many places the author disregards the chronology and jumps over historical periods to write about incidents and events from much later eras, leading to lack of focus.