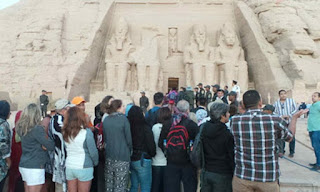 How Egyptian tourism bodes in 2017


CAIRO – 23 October 2017: The tourism sector has been receiving many positive views recently, though it is still performing well below potential and the peak figures of 2010, when 14 million tourists visited the country. 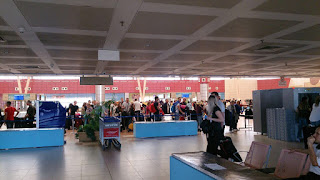 The official attributed the increase to a surge in visitors from Germany and Ukraine and said that Europeans made up 75 percent of visitors while Arabs accounted for 20 percent.

Tourism Expert Essam Ali said that giving due concern to alternative markets has reflected positively on the number of tourists visiting the country this year.

He said that German tourism came first, followed by various nationalities including China, India, Czech Republic and Hungary, among others.

He added that the spending rate of tourists has increased during the last period, reaching $85 per day. 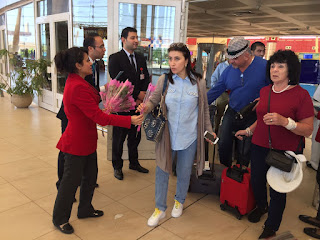 The improvement comes despite of the ongoing UK and Russian ban on flights to the popular Red Sea resort of Sharm el-Sheikh, in place since November 2015, when a Russian airliner was downed over Sinai killing all 224 people on board.

Since then, Egypt has been investing heavily in airport security and implementing tighter security measures at airports.

Though Russian Transport Minister Maksim Sokolov said that Russian experts had positively assessed one of the terminals at Cairo Airport and that the Egyptian side had made considerable efforts to toughen security measures, he did not say when air travel would resume, according to the TASS Russian news agency. 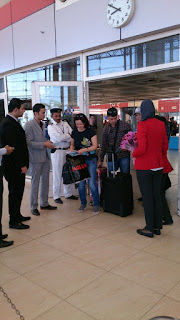 Vacationers who went to Sharm el-Sheikh during the summer holidays told Business Today magazine that security at the airport was beefed up and that they were thoroughly searched by highly trained personnel. They also referred to the updated and new security machines installed at the airport.

Though tourism has picked up, it still needs the travel bans to be lifted to bounce back.
"Sharm el-Sheikh has been seeing a growing number of European tourists this year," said one owner of a shop in the Red Sea resort.

He said that the increase in the number of European and Arab tourists this year had helped mitigate the negative effect of the Russian and UK ban.

Nevertheless, he hoped for the two countries to lift the ban as Russia and the UK account for 75 percent and 20 percent of tourists coming to Sharm el-Sheikh, respectively.

More European tourists visited Egypt this year. A recent report by the Central Agency for Public Mobilization and Statistics (CAPMAS) showed that Europe sent the largest number of tourists to Egypt in July, with around 418,000 visiting the country.

The number of Ukrainian and Polish tourists visiting Egypt also jumped 120 per cent in the first half of 2017, compared to the same period last year, Tourism Development Authority (TDA) head Hisham Al-Demiri said last month, citing data from the Ukrainian and Polish governments.

He said that the number of Ukrainian tourists amounted to more than 400,000 tourists until last August.

The surge in the number of polish tourists has prompted Polish tour operators to request that Egypt reopens its tourism office in Warsaw to cater to rising demand for flights from the Polish capital. Operators have reportedly said they would work on increasing bookings during the upcoming winter and summer seasons. 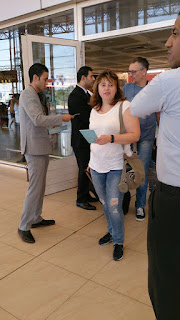 The TDA is planning to launch a winter tourism promotion campaign in Europe this month, according to Demiri, which will run until January 2018 and target markets such as the UK, Poland, Ukraine and Germany.

The TDA has further teamed up with CNN international to launch a promotional campaign to promote Egypt's tourist sites to tourists from around the world.

Recently, the country's "This is Egypt" promotional campaign has won Best Tourism Promotional Video in the Middle East at the General Assembly of the World Tourism Organization (WTO) in China, beating out 63 other contestants.

The improved situation was reflected in the findings of Colliers International's, a real-estate company, latest report on the Egyptian hospitality market during the second quarter of 2017.

It showed that occupancy rates in Egypt's major tourist cities increased in the second quarter of this year, compared to the same period of 2016.

The report said that occupancy rates in Sharm el-Sheikh increased in the second quarter of 2017 due to an increase from both the domestic and Arab markets and the lifting of the travel ban from key European countries. It expects this trend to continue over the course of the year.

Cairo also saw a four percent increase in occupancy rates in the second quarter of 2017, the report said. 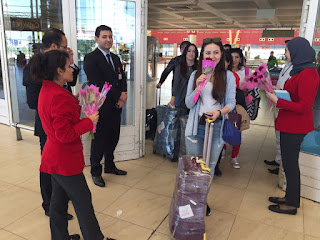 Another report by the WTO has named Egypt the world's second-fastest growing tourist destination for 2017.

The report said that the country had witnessed a 51 percent spike in international tourist arrivals this year and was on course to welcome nearly eight million holidaymakers in 2017, though this is still below the peak of 2010.

The government has been exerting considerable efforts recently to boost the vital sector and attract more tourists to Egypt.

During the recent BRICS summit meeting in China, President Abdel Fatah al-Sisi met with Russian President Vladimir Putin and discussed the resumption of air travel between Cairo and Moscow. Putin reportedly said he hoped this would happen soon.

The Chinese market is also targeted by the government. Tourism Minister Yehia Rashed said earlier this month that negotiations were underway to put on three additional flights a week between Cairo and Shanghai, Beijing and Guangzhou, in addition to increasing air traffic from China to the Red Sea and Mediterranean coasts.

The tourism authority in the Chinese Ningxia Hui Autonomous Region also signed an agreement with the Egyptian Tourism Authority early in September that should see both sides cooperate to boost tourism.

A similar agreement was signed between Egypt and Romania during Foreign Minister Sameh Shoukry's visit to the country in August that will see both states promoting tourism to each other's country.

Unlike other sectors, the devaluation of the Egyptian pound have had a positive impact on tourism as Egypt has now become a cheaper destination for many tourists around the world, which helped attract investments to the sector as well.

The UAE-based Emaar Hospitality Group, the hospitality and leisure subsidiary of Emaar Properties, has recently announced plans to develop a hotel, Vida Marassi Marina, in Marrasi resort on the Mediterranean coast.

The hotel marks the first project under the company's Vida Hotels and Resorts brand in Egypt.

Meanwhile, the devaluation of the currency and the upswing in tourism has prompted the Hilton chain to plan to expand its number of hotels in Egypt to 30 from a current 17 over the next seven to 10 years, Vice President of Middle East Operations Mohab Ghali told Reuters in an interview last month.

He said that if things remained stable, Egypt could see pre-2011 levels of tourism in the 2018 winter season, with more revenues on the way because of the devaluation.

Egypt's tourism sector is one of the country's main foreign currency earners, and it has been struggling after the political and economic turmoil following the January 25 Revolution in 2011. More than 14.7 million tourists visited Egypt in 2010, dropping to 9.8 million in 2011. 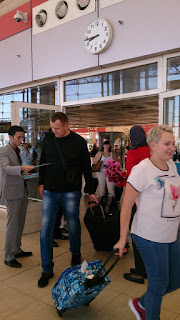 
Less than two weeks before the World Youth Forum scheduled to take place in Sharm el-Sheikh, the country witnessed a relative tourism boom nationwide, a final sign that the sector is truly recovering again.

With the beginning of the winter season, Luxor has seen the arrival of 225 tourists from France and Japan, while 170 tourists from Uzbekistan arrived to Sharm el-Sheikh. Aswan had the lion's share this month as 3,500 tourists with several nationalities visited the governorate to witness the celebration of Sun Festival at Abu Simbel Temple.

The Aswan governorate held a celebration at Abu Simbel Temple in the presence of the Minister of Antiquities Khaled al-Anani and the Minister of Culture Helmy al-Namnam, in addition to representatives of Italian and Swiss embassies amid wide media coverage by local and international news agencies and TV channels.

The governor of Aswan, Magdy Hegazy, said on the sidelines of the Sun Festival, that this celebration represents a strong starting point towards the return of tourism to its normal rates. 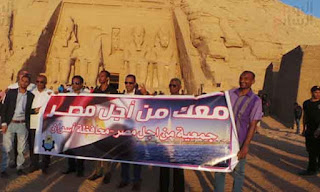 
Hegazy added despite the recent terrorist attack that hit the country on Friday, the influx of tourists and Egyptians to witness this unique astronomical phenomenon reflects the high level of security and safety in the far south of Egypt in Abu Simbel city.

The governor asserted that the security forces strengthened its presence inside and outside the temple which assured the visitors of the safety measures in the area.
Minister of Antiquities Khaled al-Anani confirmed in a public statement on Sunday that celebrating 200 years of discovering Abu Simbel in November will prove to the world that the country is safe.

The Sun Festival is a rare phenomenon that has been occurring for 33 centuries and has occurred today, lasting for 22 minutes, where the sun illuminated the Temple of Ramses II. This phenomenon occurs twice a year; on February 22 when ancient Egyptians celebrated the beginning of the agriculture and cultivation season, and on October 22 when ancients Egyptians celebrated the flooding season.

The International Airport of Luxor received on Sunday the first direct flight from Charles de Gaulle Airport in France, ending a several-year halt. The French flight was carrying 140 tourists on board, who will visit ancient monuments in Luxor in the coming days. 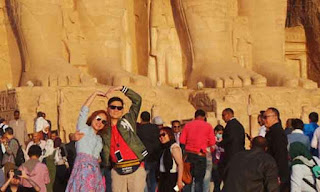 
The Luxor airport also received the first direct flight from Narita International Airport in the Japanese capital, Tokyo, carrying 85 Japanese tourists on board. The direct flights coming from Tokyo Narita airport are expected to continue on a weekly basis until April 2018.

Mohamed Othman, a member of the marketing committee for Upper Egypt, stated that the winter season is quite promising for cultural tourism, assuring that the gradual increase of tourist numbers in Luxor and Aswan will hopefully exceed the 2010 peak eventually.

Othman added that there is a spike in numbers of Chinese and Indian tourists visiting Upper Egypt, expecting the numbers of Chinese tourists to have reached 300,000 by the end of 2017. He noted that more and more nationalities are becoming attracted to cultural tourism in Egypt, such as Italians and Scandinavians, as a result of the efforts exerted by travel companies in advertising tourism in Upper Egypt.

The authority has intensified its efforts recently to open new tourist markets such as Azerbaijan, Kazakhstan, and Azerbaijan with the aim to compensate the tourism gap caused by the absence of Russian flights which accounted for about 60 percent of the total tourism in Sharm el-Sheikh.

Egyptian tourism was devastated after Russia, the top source of tourists visiting Egypt, suspended flights to and from Egypt following the disastrous downing of the Russian plane Metrojet's Airbus A321 in 2015 in Sinai.

Russian President Vladimir Putin vowed to resume flights to Egypt this year during his meeting with President Sisi on the sidelines of the BRICS Summit in China.
Posted by Glenn Meyer at 8:27 PM