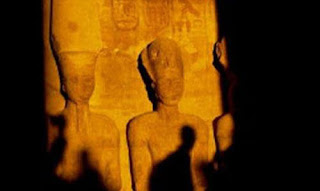 Egyptian officials joined hundreds of tourists on Sunday to watch the bi-annual phenomenon of the solar illumination of the statue of King Ramses II at Abu Simbel in Aswan governorate.

"The sun illuminated the face of the king for 20 minutes starting at 5:53am," announced Hossam Aboud, the director of Abu Simbel Temple, where the event took place.

Twice each year, the morning sun shines briefly through the temple's entrance into the dark inner chamber, lighting up three of the four 22-metre-high statues within.

On Saturday, the governor of Aswan cancelled wider festivities in mourning of the 16 police officers who were killed in a shootout with terrorists in the Western Desert earlier that day.

"The solar illumination of Ramses is a 33-centuries-old phenomenon that reflects the huge scientific achievements of ancient Egyptians," Minister of Antiques Khaled El-Enany told Al-Ahram.

"The unique phenomenon occurs twice a year: on 22 February in celebration of the start of the harvest season; and on 22 October, the beginning of the season of agriculture and floods," he added.

One of Egypt's most powerful pharaohs, Ramses II had the temple carved into a sandstone mountain on the banks of the Nile to align with the sun twice a year — in February and October — to celebrate his birthday and ascension to the throne.

In the 1960s, the temple was relocated to make way for Lake Nasser, the man-made reservoir of the Aswan High Dam.

The solar alignment has since occurred on the 22nd of February and October every year – one day later than the original date.