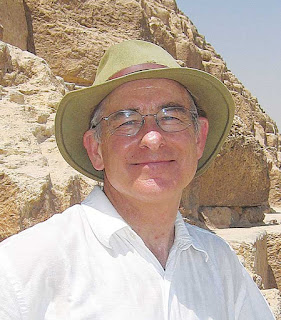 Submitted Photo Archeologist Mark Lehner is shown in Egypt, where his 30 years of research have translated into a newly released book.

Minot native and archeologist Mark Lehner has released a new book on the pyramids of Giza that's been 30 years in the making.

First commissioned to write the book in 1986, Lehner was gathering information right up to publication on a late-breaking discovery that sheds light on how builders in around 2600 BC were able to construct the pyramids.

Lehner said some details of the discovery made it into the book, "Giza and the Pyramids," co-authored with Zahi Hawass, another leading Egyptologist and a former minister of state for Antiquities Affairs in Egypt.

The new information about pyramid construction comes from the discovery of a papyrus logbook of a team of workers building the the Great Pyramid of Giza, one of the Seven Wonders of the Ancient World. Archeologists have long wondered how granite, known to be quarried from more than 500 miles away, and limestone from several miles away made it to Giza.

The journal of Merer, an overseer of a team of 40 workmen, speaks of shipping limestone downriver from a quarry east of the Nile and through man-made canals to the site on the west side of the Nile.

Lehner said the writings jive with archeological discoveries of a waterway. A leading expert in Egyptian archeology, Lehner was involved in the discovery of a central canal basin believed to be the primary delivery area to the foot of the Giza Plateau.

"A lot is so recent that we barely got it into the book that was coming out," Lehner said of the discoveries. The book is a heavyweight and not a light read.

"The book is as big as a Sears-Roebuck catalog – at least the ones my grandparents used to have out on the farm near Minot," Lehner said. "It's kind of like an encyclopedia of Giza."

He said the book will appeal to scholars and to laymen who want to know more about the pyramids.

"Parts are written, hopefully, in somewhat of an engaging way," he said. It is being published by Thames & Hudson.

Lehner previously authored "The Complete Pyramids," published in 1997. The book discussed pyramids generally, while the new book focuses on the three pyramids of Giza. Giza also is the site of the Great Sphinx, which Lehner says will be the topic of his next book.

Lehner, who has been working in Egypt for 30 years, eventually hopes to write a memoir about growing up in Minot and leaving for Cairo to become one of the most knowledgeable people in the world about the Giza Plateau.

Lehner's newest book can be found on Amazon, where it comes in stock to be shipped on Sunday.

A documentary about the latest Giza discoveries, "The Lost Secrets of the Pryamids," is scheduled to air Sunday on Canada's CBC-TV network. Lehner expects an American version of the documentary to air at a future time.