We really don't appreciate Ancient Egyptian technology enough... look at this amazing builder's level for calculating angles from the Tomb of Kha and Merit, the famous TT8

This is a sophisticated builder's level, Ancient Egyptian style, found in the tomb of the architect Kha (now in Turin). The label, written by an archaeologist who naturally never thought to ask anybody in the trade first [it's instantly recognisable from modern examples, I'll try to include one] says [in Italian]:
Astuccio per bilancia
L'astuccio di legno è vuoto, ma forse l'astuccio stesso, perforato in ciascuna estremita, formava l'asta orrizontale dalla qual venivano sospesi piccoli dischi bronzei per la pesatura.
or in English:
Case for scales
The wooden case is empty, but perhaps the case itself, perforated in each extremity, formed the horizontal rod from which were suspended small bronze disks for the weighing.

In fact, that double pattern on the round bit is for calculating angles - the points of the outer ring are at 20 degree intervals [so the Egyptians were using the Babylonian 360 degree circle??? I think we should know about this!] and the half-way inverted points marks 10 degrees. The perforations will have taken plumb bobs to calculate the verticals. The strings and bits were stored in the box. It must have been Kha's most essential possession, the tool of his craft. It is [also] totally brilliant, highly sophisticated, and a living tribute to Ancient Egyptian mathematics, craft and skill. A very useful article, 'The architect Kha's protractor' describes not only this item but other technology he may have used, in terms of Egyptian math. The writer associates the 18+18 points of the zigzag with the decans - time measurement - but cannot explain why, so dismisses the obvious thought of a 360° circle... https://arxiv.org/ftp/arxiv/papers/1107/1107.4946.pdf 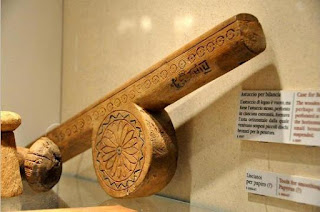