BWW Review: World Premiere of THE PRINCE OF EGYPT is Magnificent


BWW Review: World Premiere of THE PRINCE OF EGYPT is Magnificent 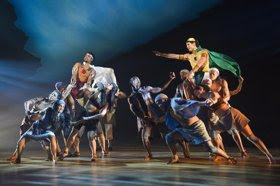 This weekend saw the TheatreWorks world premiere of The Prince of Egypt, which first came to life almost 20 years ago as a DreamWorks animated movie of the same name. Taking its cue more from Cecil B. de Mille's "The Ten Commandments" and less so from the Bible, Philip LaZebnik's musical book creatively reimagines Moses as "spare to the heir" behind his adoptive brother Ramses in this retelling of the Exodus story. Coupled with Stephen Schwartz' rich and nuanced score and lyrics, and an absolutely dynamic, multi-ethnic international cast, this epic saga of two brothers caught up in a destiny-defining relationship is altogether magnificent.

Universal themes converge with intimate personal story to great effect in director Scott Schwartz' more than capable hands. In the opening scene, he beautifully connects the audience to the grand complexities of all human life, poignantly portraying the fickleness of fate and the accident of birth without a word. As a trumpet sounds, anonymous actors walk onto the stage. Bending down, their hands sift through the sands of time and then fate assigns them roles. One picks up the oppressor's whip, another dons the head wrap of a slave. Soon, slave children are slaughtered but one will miraculously survive. So much is out of their control, but can a spark of the divine within humanity help them to make the world a better place?

It's a telling tableau and one that's enhanced by Kevin Depinet's scenic design, which is effective in its simplicity. A jagged scrap of sky overlooks the dismal desert sands, ancient even then in the time of the pharaohs. It serves as the backdrop to the stone blocks used throughout the show that magically become the throne of Pharaoh Seti, a majestic barge on the Nile and a secret chamber where Moses and Ramses hide away from the world confiding their hopes and fears to each other. Weighty topics to be sure, but boys will be boys as the saying goes and soon enough a mischievous Moses (the remarkable Diluckshan Jeyaratnam) laughingly challenges his brother Ramses (an equally talented Jason Gotay) to a chariot race.

The careening carts and horses are one of the most amazing examples of stagecraft and choreography in recent memory. The rigs are made up entirely of dancers upon whom the privileged princes sit, capes blowing in the wind as they carelessly wreak havoc on the marketplace and reduce a temple to rubble in their quest for a good time. We can thank choreographer Sean Cheesman for this rapturous ride. (Later, he gives us a human river that carries the precious cargo of baby Moses into the arms of Queen Tuya --playEd Strongly by Christina Sajous -- and the writhing, burning bush that will lead a more subdued Moses to seek an end to the slavery of his people.)

Naturally, Pharaoh Seti (Tom Nelis), upon whose shoulders the weight of the empire sits, is not happy with either of his sons. Moses seeks to take the blame, but his father metes out his most caustic remarks to Ramses, who will one day succeed him. "One weak link can break the chain of a mighty dynasty," he booms as both boys slink away in shame.

LaZebnik adeptly defines the two princes, imbuing them with very human qualities and the differences that will one day separate them. Ramses desperately wants his father's approval while Moses' position as "the spare," doesn't stop him from hoping to do something that will last long after he's gone. He gets his chance once he meets his birth sister (Julia Motyka) and brother (David Crane) and discovers his Hebrew heritage. Now he can no longer look at the kingdom's slaves in the same light and flees after accidentally killing an Egyptian overseer who was brutalizing one of his people.

Ramses and Moses are aided immeasurably on their separate journeys by strong women. Future queen Nefertari (a talented Jamila Sabares-Klemm) is the epitome of sorrow and strength when her son is killed. And wife Tzipporah (played fearlessly by Brennyn Lark) along with Moses' sister Miriam sing the musical's signature song "When You Believe," giving Moses the courage to go on.

Moses returns, demanding that his brother end the system of slavery but Ramses is persuaded by Hotep the high priest (the wonderful Will Mann) to do his duty as Pharaoh of Egypt. What Ramses doesn't know is that it will take many plagues to get him to change his mind for good.

The tug and pull of brotherly love versus the power of the patriarchal system -- more ancient than Egypt itself - is magnified in LaZebnik's alternative ending to the Exodus narrative, as Pharaoh Ramses cannot, in the final analysis, kill his brother or the Hebrew people. Instead, it is Hotep and the priestly caste who follow the Hebrews into the Red Sea and there, meet their doom.

The best of stories leave us with more questions than answers. The Prince of Egypt asks us to ponder the systems and circumstances that controlled the fates of two princes and their peoples. There in the churning waters of the Red Sea, tribalism and the pitting of "us against them" reigned victorious. Hopefully, this new production will help us find another way forward together.