Is this lost city a glimpse into the future? | CNN Travel

Catch "The Wonder List" on CNN Saturdays at 9 p.m. ET/PT

Is this lost city a glimpse into the future?

Bill Weir and Drew Kann, CNN • Published 20th October 2017
FacebookTwitterEmail
Catch "The Wonder List" on CNN Saturdays at 9 p.m. ET/PT
(CNN) — It was the envy of the world, teeming with life, energy and grand human plans.
A place where kings became gods in secret ceremonies, and where the Trojan prince Paris brought the kidnapped Helen of Troy -- if the legends are true.
Then, more than 1,200 years ago, the earth moved and the city of Thonis-Heracleion was swallowed by the sea.
For hundreds of years, this Venice of the ancient world existed only in legend, but an unlikely explorer turned myth to reality. 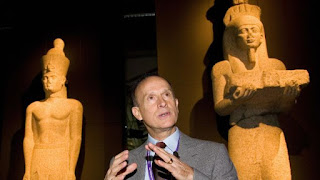 French marine archaeologist Franck Goddio and his team made the stunning discovery of the lost city of Thonis-Heracleion.
ANGEL NAVARRETE/AFP/Getty Images


Franck Goddio worked in finance and economics for most of his career -- just a guy at a desk buried in numbers, all the while dreaming of what's buried at sea.
But in the early 1980s, Goddio decided to dedicate his life to his true passion, underwater archaeology. And after mapping huge tracts of seabed off the coast of Alexandria, Egypt, he made an incredible find: Beneath the waves of Abu Qir Bay, a few miles east of Egypt's second-largest city, Goddio's team discovered a sunken world of temples and hieroglyphs, shipwrecks and sanctuaries.
He'd found Thonis-Heracleion, the 7th century BC city named after Hercules that was a key religious center and trade hub for the ancient world. Goddio has been excavating the site since its discovery in 2000, but only a small fraction has been fully unearthed. In fact, on the morning of CNN's visit to his floating research laboratory, his team had discovered yet another shipwreck. 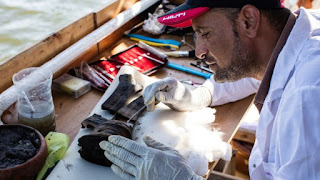 Archaeologists sift through new artifacts found in the excavation of Thonis-Heracleion aboard the Princess Duda research vessel.
Bill Weir/CNN


But for all the mystery still waiting to be discovered, the question of exactly how Thonis-Heracleion ended up beneath the waves is a more pressing concern for modern Egypt.
The consensus among experts is that a confluence of natural catastrophes doomed the city, with rising seas levels, subsidence and a series of earthquakes playing a role. 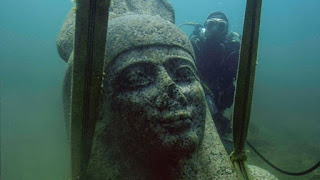 One of the many ancient statues Franck Goddio's team discovered beneath the sea.
Christoph Gerigk © Franck Goddio / Hilti Foundation


Today, just miles away from this sunken city, Alexandria's 4.5 million residents go about their daily lives, despite a ballooning number of similar environmental crises.
Big storms now flood neighborhoods, forcing residents to reach their apartments by boat. The Egyptian government has warned that 13% of the country's coastline could be in peril from rising seas levels. And farmers along the Nile Delta are struggling to grow the crops they and their countrymen depend on in the region's increasingly salty, parched soils.
When CNN visited Goddio's research vessel -- the Princess Duda -- we asked diver Eric Wartenweiler Smith what it was like to work in this underwater world in the shadow of a bustling metropolis.
"Sometimes, you'd come to the surface on a calm day and you could see the people riding bikes or horse-drawn buggies, and you could hear their voices and see all those buildings ... ," he said. "And yet here on the bottom is another city, the same city, that disappeared. And it makes you wonder: Do they know? Do they think about it ever?" 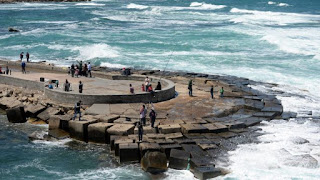 Fishermen try their luck casting into the sea near the port of Alexandria.
MOHAMED EL-SHAHED/AFP/AFP/Getty Images


There is reason to wonder ... and to worry.
Back when Thonis-Heracleion was a living, thriving city, Egypt had a population of about 4 million. Demographers project that by 2050, it will be 150 million.
What will be lost by then? What will be found? And how much history are we doomed to repeat?