An oasis of pyramids in Egypt? Discover it - Egypt Independent 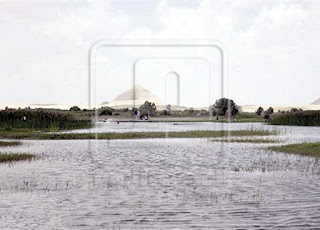 Dahshur.. Welcome to a world of magic and mystery. The natural beauty is undisturbed, an oasis undiscovered by the masses. Located on the outskirts of Greater Cairo, Dashur stretches between the three governorates of Giza, Fayoum and Beni Suef.

The lush area is an hour away from Greater Cairo, where the desert embraces palm trees, green farms and water. Dashur is a hidden secret that 95 percent of the population of Cairo does not travel to or even have information about the place.

A collection of beautiful and quaint villages in Egypt, Abusir, Dahshur, Minshat Dahshur, Lisht, Maidum, Hawara and Lahun surround Egyptian pyramids and lakes. There are about 89 pyramids in Egypt overlooking these villages, amid palm and mango farms.

I was lucky enough, last Friday, to participate in a trip to visit a number of the lesser known pyramids in Egypt. The journey was organized by an ecotourism guide.

We started the trip at 8 am from the Saqqara area. We entered the site overlooking a valley filled with palms, in several meters we saw the monuments of Pharaoh Djoser from the 3rd dynasty. The most famous monument for him is the step pyramid.

This pyramid is the oldest stone building in the world and has a statue of the Pharaoh Djoser. We were lucky to go inside the Pyramid Complex of Unas, a pyramid destroyed from the outside located on the southern side of the Saqqara pyramid. Below this pyramid is a very impressive museum.

Due to time constraints we left the pyramids and made our way to Dahshur. The air was hot, but the palm trees provided much needed shade. 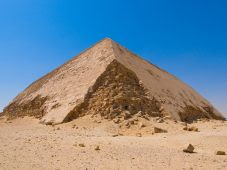 We arrived at the Berket el-Malek (Dahshur lake), expecting to see the migratory birds, but found the lake was dry. The government had made a decision to dry the lake so that migratory birds can not break out in the migration season for fears of spreading the avian flu virus. The decision was made five years but is still enforced.

We were able to see the vast desert with its natural beauty, the ancient ruins of ancient history, the traditional rural villages, the ancient waterways, and the cultural traditions of the indigenous people.

The chief inspector of the region's antiquities, Ramadan al-Qott, told us that King Farouk, the late King of Egypt and Sudan, accompanied by some of his entourage, would travel every year, especially in March,  to this magical spot for hunting trips. The lakes attracted a variety of migratory birds on their seasonal journey, coming from Europe and the Mediterranean countries.

Qott said that the elite of Egypt at that time would also organize hunting trips to the exotic area and enjoy the sun, especially from mid April until the end of March. Artists and writers, such as Mohamed Hassanein Heikal and Tawfiq al-Hakim, were also fans of spending leisure time in the area. 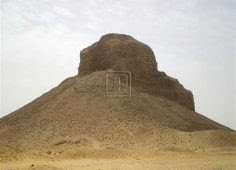 Many members of the local community still retain their old customs and live in a traditional way. Most Dahshur residents live on agriculture, especially palm and mango cultivation.

Qott says that this region has the largest factories and schools for hand-made carpets in Egypt and the region. The products are the best and the most expensive, because they are not just carpets but pieces of art. Dahshur consists of five villages and cab easily be reached by car through the Mariouteya road.

■ Lunch under palm and mango trees

In the afternoon, we were invited to lunch, amidst farms, gardens and the rural lands. The dishes varied between local pies, cheese and honey. We ate under the palm trees, which sprinkled dates on us while we sat. The residents gave us wonderful traditional dishes for dinner.

In the evening, we tried to get to the magnificent Maidum Pyramids before it closed at 4 pm. Maidum is the first building built by Sneferu after he ascended the throne in Egypt.

He chose a place to build it near his government headquarters, which is now near Maidum. We left with the sun dwindling behind the great building. There was not time left to visit the pyramids of Hawara and Lahun, they would have to wait for another tour another day.