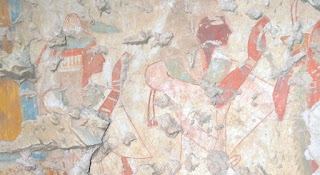 Khonsu and his wife worshipping the gods Osiris and Isis

Japan – A team led by Waseda University Professor Jiro Kondo discovered a previously unknown tomb in the Theban necropolis in Egypt. The beautifully decorated tomb is thought to date to the Ramesside period (circa 1200 BCE) based on stylistic characteristics. The tomb was built for a man named Khonsu with the title of Royal Scribe.

In the almost 200-year history of Egyptology, innumerable tombs have been found and identified by owner's name and title, so it was thought that further finds would be rare. However, this discovery raises hopes that more previously unknown tombs may still be found in the Luxor area.

A hole was discovered while cleaning the forecourt of the tomb of Userhat (TT 47), a high official under Amenhotep III. The hole led to the transverse hall of the tomb of Khonsu.

The tomb has a T-shaped plan with an east-west main axis and the entrance facing east, currently covered with debris. The tomb measures approximately 4.6 metres east to west from the entrance to the rear wall of the inner chamber, and approximately 5.5 metres from north to south across the transverse hall.

On the north wall of the entrance area is a carved picture showing the solar boat of the god Ra-Atum being worshipped by four baboons in poses of adoration. Adjacent to these images, in hieroglyphics inscribed vertically, Khonsu is called "true renowned scribe." On the southern part of the eastern wall in the transverse hall, Khonsu and his wife are shown worshipping the gods Osiris and Isis. Behind Khonsu and his wife is a depiction of two ram-headed deities, probably Khnum or Khnum-Re.

On the southern wall by the hole to Userhat's tomb, there are vertical inscriptions near the ceiling, bearing the name Khonsu and title Royal Scribe. The frieze pattern near the ceiling is in a typical khekher style of the Ramesside period. The ceiling decorations are generally in better condition than the wall paintings.

Entry to the inner chamber is currently obstructed by piles of stone blocks, but the researchers expect to find more wall paintings inside.

Waseda began surveys in Egypt in 1966, obtaining permission for excavations in 1971. The Institute continues to conduct excavations each year from its Waseda House base in Luxor.