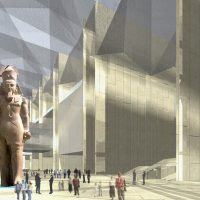 The government aims to inject investments worth EGP 2.5bn for the projects of the Antiquities Sector during the current fiscal year.

The plan of sustainable development issued by the Ministry of Planning for the fiscal year of 2017/18 showed that government investments will contribute roughly 14.9% of total investments of EGP 370.6m, while the economic bodies will contribute about 85%, worth EGP 2.1bn.

According to the report obtained by Daily News Egypt, the contribution of economic bodies will account for the largest share in the volume of investments directed to the archaeological sector, due to funding the project of the Grand Egyptian Museum with EGP 2bn, as well as the National Museum of Egyptian Civilization in Fustat with EGP 30m.

The Grand Egyptian Museum will be built on an area of 117 feddans, including the main building that takes a third of the area, next to service, commercial, and entertainment buildings, exhibition halls and a museum garden, turning it into a diverse museum capable of receiving about 8 million visitors.

The main hall will be built on 160,000 sqm, making it the largest showroom in the world. It will showcase 1,000 artefacts.

The project also includes 14 restoration facilities that handle all antiquities, including wooden artefacts and heavy monuments weighing over 250 kgs, along with a small archaeological laboratory. Moreover, it will also include the great staircase, which will show 100 royal statues representing various eras, in addition to a conference hall that can accommodate 1,000 attendees.

Waad Allah Abu El Ella, head of the projects sector at the Ministry of Antiquities, said that the ministry relies on the allocations funded for certain projects.

He added that the investments targeted to the archaeological sector, which the government has allocated within the general budget during the current fiscal year, will not be relied on without giving them officially and on the ground.

He pointed out that the government has already disbursed EGP 270.1bn to the Ministry of Antiquities earlier this year to complete 8 archaeological projects and promised to implement the entire Avenue of the Sphinxes project with a separate budget.

He noted that some of the eight projects have already been completed, where the Baron Amban Palace in Heliopolis and Muhammad Ali Palace in Shubra have been restored, as well as the Jewish temple.

According to the head of the projects sector, the end of this year will see the completion and opening of several projects, including the project to develop the whole pyramids area of Giza, and the Museum of Abidos, which needs about EGP 8m to complete, next to Sohag Museum which still need EGP 20m.

About EGP 50m is expected to be allocated for the development of archaeological and regional museums, which is 13% of total governmental investments, along with EGP 6m for the implementation of restoration and maintenance projects, accounting for 2%, and finally EGP 4.5m for the Museum of Nubia taking 1%.

The government is also set to allocate EGP 4m for the training center and staff club (1%), EGP 3m for the renovation and development of the Supreme Council of Antiquities and a similar amount for the Ancient Egyptian Art Revival Center, and EGP 10m (2.7%) for all other projects.

The Antiquities Sector Plan for the current fiscal year aims to implement a number of key objectives, including the promotion of cultural, cognitive, and archaeological awareness, as well as the development of a system of care for museums, archaeological sites, conservation of monuments, and historic buildings.

Through the project plan and targeted programmes during the current fiscal year, the Antiquities Sector seeks to open new attractions to increase income and promote cultural and archaeological awareness.

The plan aims to develop and restore archaeological sites, museums, mosques, and churches in order to preserve the heritage.

The plan includes the completion of the development of the pyramids arecheological areas, develop the archaeological sites in Luxor, complete the Avenue of the Sphinx, next to the development of a number of historic mosques, including Zahir Baybars Mosque, Terbana in Alexandria, Zaghloul in Rashid, and Shorbagi Mosque.

It is also planned to restore and develop a number of Coptic monuments in order to preserve and raise their efficiency, including the Monastery of St. Paul in the Red Sea and the Hanging Church.