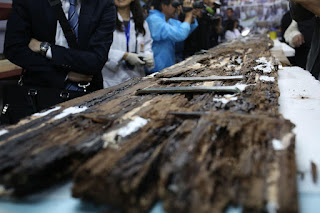 Archaeologists work on the restoration of a wooden piece of Khufu's second solar boat, which was found during an excavation work near the Great Pyramid of Giza, Egypt on March 29, 2017. ( Fared Kotb - Anadolu Agency )
August 17, 2017 at 1:54 pm

The ministry said in a statement that 32,638 artefacts had been lost over more than 50 years, according to recent inventory works.

It explained that the inventory of the pieces would serve to track them down with the help of Interpol, the international police network, and other global and local authorities.

The ministry has not provided further details on how the items were lost. However, it stated that some of them were lost during the state of security chaos that accompanied the 25 January 2011 revolution and its aftermath.

Egypt has on numerous occasion announced the return of some antiquities that were stolen by individuals and illegally smuggled out of the country.