Reviewing the design of the Egyptian Museum, completed - Egypt Today 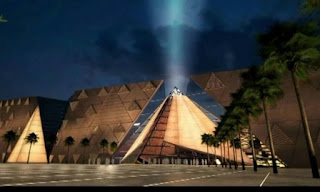 The Façade of the Grand Egyptian Museum-File Photo

Reviewing the design of the Egyptian Museum, completed

Cairo- August 26-2017: Reviewing the first stage of the final design of the Grand Egyptian Museum façade has been completed with the designer, Mohamed Atwa the director of the Antiquities and information affairs recounted.

The design includes the Great Staircase, the Children's Museum and the treasures of King Tutankhamun. The review includes beside the design, the antiquities distribution, number of showcases in addition to graphic and media work, according to a released statement.

All the previous preparations are executed to commensurate with the partial opening of the Grand Egyptian museum, scheduled in 2018.

After the opening, the Grand Egyptian Museum, located between modern Cairo and Giza pyramids, will contain more than 100000 artefacts that cover 3000 years of the Egyptian history.
Posted by Glenn Meyer at 9:54 PM