THE date that a mythical planet will appear before passing Earth and destroying all life has been hidden inside the Pyramids of Giza for thousands of years, it has extraordinarily been claimed.

Christian numerologist David Meade claims he has discovered a “date marker” that reveals when Planet X – and the reported resulting apocalypse – is coming.

Planet X, or Nibiru, is reportedly a huge planet with a vast orbit that conspiracy theorists claim will one day pass so close to Earth that its gravitational pull could wreak havoc on our planet, triggering earthquakes and other catastrophic events.

The myth was born in 1976, when writer Zecharia Sitchin claimed that two ancient Middle Eastern cultures – the Babylonians and Sumerians – told of a giant planet – Nibiru – that orbited the Sun every 3,600 years.

Earlier this year, Mr Meade claimed to match the positions of celestial bodies with Bible verses, and worked out when Planet X would cause the end of the world - on September 23. 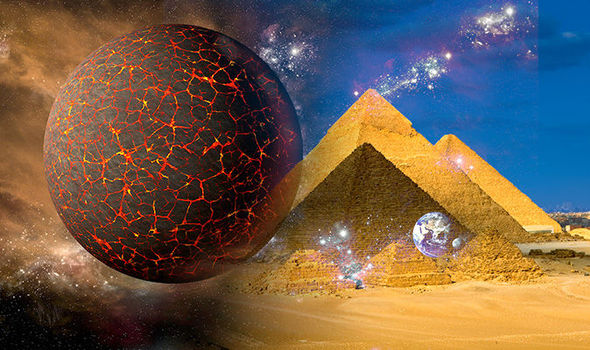 Planet X will appear on September 23, according to a Christian decoder.

He claims the same timeframe for its arrival is shown by the pyramids.

The pyramids, built nearly 5,000 years ago, have long generated conspiracy theories due to mysteries over how they were built and their purpose.

The most far-fetched include that they were built with the aid of aliens who visited our ancient ancestors.

There are claims some hieroglyphics depict aliens and space craft that visited Earth who were worshipped them as gods.

It is very strange indeed that both the Great Sign of Revelation 12 and the Great Pyramid of Giza both point us to one precise moment in time – September 20 to 23, 2017.

He says he has discovered two tunnels set at precise angles in the Great Pyramid that will point to significant celestial objects after September 20.

He said: “So let’s review the facts: it was built five millennia ago, by someone who possessed a supernaturally high level of knowledge.

“We’ve never found bodies, treasures or hieroglyphics in the Pyramid. It’s a date marker to this fall [autumn] – 2017.

“Why would someone over 5,000 years ago build such a structure with perhaps only one purpose – to lead us to a date this year and this fall?”
The Planet X conspiracy theory was given a boos earlier this year when NASA announced the discovery of a new planet in our solar system which they named Planet Nine.

They found evidence for a real planet up to 10 times the mass of Earth in the outer reaches of the Solar System, in the constellation Orion.

The Great Pyramid is also aligned perfectly to Orion.

However, NASA says Planet Nine will not pass earth, and the Planet X theory of an apocalypse is a hoax.

There have been many predicted end of world dates that have all come and passed before… let’s hope Mr Meade has also got it wrong.
Posted by Glenn Meyer at 8:57 AM