The imaging of ancient history: Researchers look back on decades of CT-based research on Egyptian mummies | Radiology Business

The imaging of ancient history: Researchers look back on decades of CT-based research on Egyptian mummies 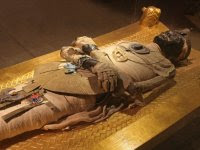 CT examinations of Egyptian mummies have been used to study ancient history for more than four decades, allowing specialists to feel as if they've traveled back in time. A team of researchers from Germany and Switzerland compiled published findings from 47 such analyses from over the years, exploring the data and publishing their results in Current Problems in Diagnostic Radiology.

"We provide a systematic overview and summaries of paleopathologies as well as artificial changes," wrote lead author Kais Hussein of Medizinische Hochschule Hannover in Hannover, Germany, and colleagues. "This overview is important to determine what we already have and what should be addressed in future CT-based studies on mummies."

Overall, the researchers focused on research on 189 mummies. The earliest data was from 1973, and the most recent was from 2013. For each study, they focused on the subject's individual name/pseudonym, identification number, sex, length, age, location of excavation, medical pathologies, dental and jaw status, artificial changes and foreign objects.

Reviewing the data, the team found that radiotomography, a modality that precedes CT, was actually used on one mummy in 1975. They also noted that modalities used in addition to CT ranged from conventional radiology and MR to polymerase chain reaction with ancient DNA.

"Owing to removal of organs, some diseases might be underrepresented, but, as far as we know, common diseases in ancient Egypt were traumas, infectious and degenerative diseases, in particular tooth and jaw pathologies, while malignant tumors appear to have been rare," the authors wrote. "Comparison with other ancient cultures is difficult, for example, because mummification was performed in different fashions. In pre-Columbian mummies from South America, removal of inner organs was not a standard procedure."

CT scans have not been helpful in determining the cause of death of these mummies. A cut through the throat was found in one case, for example, and CT-verified trauma were identified in some others.

"The identification of the exact cause of death is difficult, in particular because many organs have been removed," the authors wrote. "Microorganisms such as mycobacteria and plasmodia can be detected by genetic analysis from bone marrow–extracted ancient DNA. However, tuberculosis and malaria can be chronic and are not necessarily causes of death. Traumatic bone fractures could lead to massive bleeding and hypovolemic shock."