Prospecting: Egyptians are looking for dreams of getting rich underground (Google translate)

Translated by Google, from Arabic. 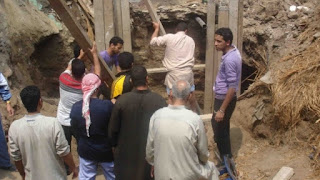 Archaeological excavations inside a house


Articles: Prospecting: Egyptians are looking for dreams of getting rich underground
16 August 2017

Emad Anan
An Egyptian writer and journalist, a master of media studies, he worked as a political researcher and media consultant in a number of newspapers, news websites and Egyptian and Arab research centers.

Archaeological excavations inside a house
"I do not eat or hope from searching and digging, one antique piece that can lift us up to the seventh heaven and pull us out of the reality we are living now." With these words, Abu Dahab (nickname) commented on his quest for the past five years to explore archeology inside his house Located in Sharkia Governorate.

The quickest dreams of getting rich and trying to catch up with the rich train in the shortest time were the main motive behind the spread of archaeological excavations in Egypt, which have become a phenomenon that threatens the history and civilization of the country, especially in light of the alarming figures reported by the reports of antiquities trade and the volume of smuggling abroad.

Many of the questions force itself strongly, in an attempt to break into this dark basement to dismantle some of the talismans related to the size of the real market of this trade and the most prominent tricks of smuggling abroad, and the extent of the State's responsibility for this crime, especially with what is raised about the involvement of some officials in this system.

The market for antiquities trade is the largest market in Egypt in terms of size, and although there are no official statistics reveal the real number of the size of this market, many reports confirm the excess of 20 billion dollars annually, as published by the " Post Post " and confirmed by some of the archaeologists inside Egypt.

However, despite the fact that the size of the antiquities trade market has reached four times the income of the Suez Canal, which is close to $ 5 billion a year, and double the income of tourism, many archaeologists have pointed out that the true size of this market exceeded the figure, especially after the revolution of 25 January 2011, as the rates of exploration and theft of archaeological stores from various museums in the Delta and Upper Egypt.

An attempt to smuggle 9,000 pieces of antiquities outside Egypt through a gold trader in the Ain Shams area of ​​Cairo in April 2016 is the largest of its kind in recent decades. However, it was thwarted by investigating the finds that revealed that these pieces were extracted from tombs at the top .

Al-Azhar Foundation authorized the head of the former fatwa committee, Dr. Abdul Hamid Al-Atrash, to excavate the antiquities, pointing out that it is halal as long as it is within the scope of the land owned by the person conducting the excavation