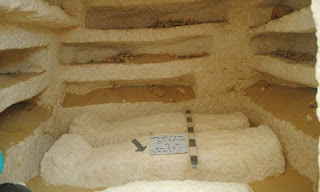 By: Egypt Today staff
CAIRO –  The three tombs were discovered during excavation work carried out at al-Kamin al-Sahrawi area, south east of Samalout town in Minya Governorate, the Antiquities Ministry announced Tuesday. Ayman Ashmawy, Head of the Ancient Egyptian Antiquities Sector explained that a collection of sarcophagi of different shapes and sizes as well as clay fragments that date the tombs between the 27th Dynasty and the Greaco-Roman era were found inside the three graves. 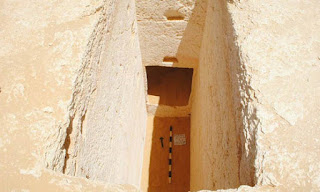 "A fact assumes that the area was a great graveyard a long time ago," Ashmawy recounted. He described the discovery as "very important" because it reveals more confidential information of al-Kamin al-Sahrawi archaeological site,"
"The archaeological mission succeeded to uncover about 20 tombs designed in Catacombs architecture, this style was wide spread during the 27th dynasty and the Greaco-Roman eras,'' Ashmawy admitted. 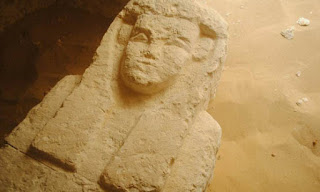 Ali al-Bakry Head of the Archaeological Mission that discovered the tombs explained that the three newly discovered tombs have a different architecture design than the previously discovered ones. The first tomb is composed of a perpendicular burial shaft engraved in the rock and leads to a burial chamber containing four sarcophagi with anthropoid lids.

The second tomb contains a perpendicular burial shaft and two burial chambers. 'The first chamber is located in the north, where remains of two sarcophagi are found suggesting that it was the burial of two people. A collection of six holes for burial were also found, among them one was the burial of a small child.'

"This was the first time to find a burial of a child in al-kamin al-Sahrawi site," Bakry said, adding that the second room is located at the end of the shaft and does not contain anything except remains of a wooden coffin. 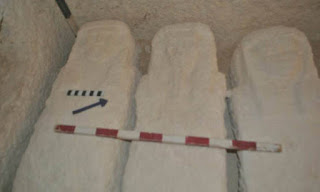 Bakry noted that studies carried out on bones revealed that they are for men, women and children of different ages, a fact affirming that these tombs were a part of a large cemetery for a large city and not a military garrisons as some suggest. The mission is still working to reveal more secrets. 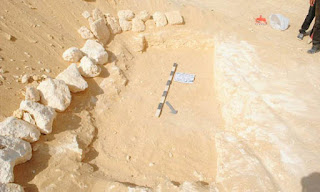