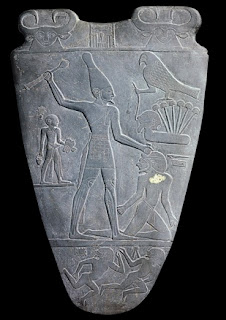 The Narmer Catalog is a comprehensive database, gathering in one convenient location all available information about archaeological objects with inscriptions related to Narmer, the first king of Ancient Egypt. The Catalog includes 112 inscriptions, from 28 different sites in Egypt, the Sinai, and southern Canaan.

This digital catalog is provided as a free public resource for researchers and others interested in this key figure in the history of ancient Egypt.

What The Narmer Catalog Contains

The Catalog contains records for all known artifacts with inscriptions bearing the name of Narmer. Also incorporated into this database are inscriptions attributed to his reign, including several "problematic" inscriptions, whose exact meaning and dating have yet to be positively determined.

Each record in The Catalog includes key information (including Dated by, Type, Material, Site, and Depository), illustrations (both drawings and photographs), as well as an extensive bibliography of the inscription.

The most well-known entries in the catalog are the Narmer Palette (shown here) and the Narmer Macehead. Also included are much more recent discoveries, including unpublished inscriptions, and recent reconstructions such as the Narmer Boxes (Source nos. 6101, 6102, and 6103).

One enduring question these inscriptions have helped to address is Narmer's true identity. The issue is whether the ancient Egyptian ruler known by the personal name Menes took the "throne name" Narmer (as the majority of Egyptologists agree) or whether Menes was actually Narmer's successor, who took the throne name Hor-Aha. This question is the subject of the article "Who Was Menes?" which can be found on this website.

Originally from the Upper Egyptian city of Thinis, near the site of Abydos, Narmer is credited with having unified Egypt into a single kingdom, c. 3100 BC. The Narmer Palette depicts him wearing the crown of Upper Egypt on one side and the crown of Lower Egypt on the other side, symbolizing the unification of Upper and Lower Egypt. Two seal impressions from Umm el-Qa'ab, a necropolis in Abydos, Egypt, place Narmer as first in two different lists of the first kings of Egypt. One seal impression, from the tomb of king Qa'a, the last king of the First Dynasty, shows all eight kings of what we now call the First Dynasty in order, starting with Narmer. Narmer was likely preceded by Ka (in Upper Egypt) and succeeded by Hor-Aha.

Learn more About the Narmer Catalog »