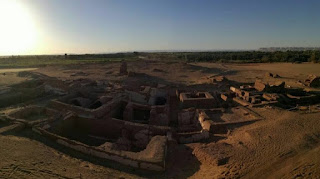 Remains of of the Roman Empire saw the light on the hand of an Egyptian mission from the Ministry of Antiquities. The five uncovered Roman tombs were discovered in Dakhla following some excavation works at an archaeological site.

The tombs were found built out of mud-brick, and the first one is the biggest with an entrance that leads into a rectangular hall, where visitors can find two other burial chambers, as Ayman Ashmawi, the head of the Ancient Egyptian Antiquities Sector at the ministry explains.

The area is believed to be full of roman remains, as the tombs found were not the only discovered relics in the area.

"A number of artefacts were found inside the tombs, which consist of a large remains of a funerary mask bearing a human face and painted in yellow; a set of pottery vessels of different shapes and sizes, and tow ostraca, one of which contains hieroglyphs while the second bears text written in Hieratic," said Gamal Al-Semestawi, the general director of Antiquities of Middle Egypt.

The ministry announced that the excavation work will keep going looking for further hidden gems of the era.

According to the head of the mission, Magdi Ibrahim, the discovery is the seventh of its kind in the same place, adding that every season witnessed a discovery.

"The mission succeeded in its six previous excavation seasons to discover eight Roman tombs in good condition with similar architectural design," he added. "They are composed of a rectangular hall and two side chambers with sandstone vaulted ceilings used as burials. The hall has a mud brick ceiling."

Al-Shaghala area is located to the west of Mout city almost 3 km away of Dakhla in the middle of three other archaeological sites.

This is not the first accidental discovery of remains of archaeological sites this month. Last week, a collection of rock-hewn rocks and the remains of a residential area dating back to the Coptic era were discovered beside Al-Nassara necropolis in Al-Bahnasa, Minya.

The remains were stumbled upon by accident by an Egyptian mission from the ministry in an excavation work at the area. However, the remains are not the only discovery to be made in the area since the excavation process started in 2008. The remains of a fifth century church were also discovered earlier. The church was found to be built of mud bricks; a shrine was discovered beside it. The remains of the shrine consisted of a prayer hall and a number of chambers with walls covered with plaster and decorated with coloured decorative elements and religious carols written in Coptic language.