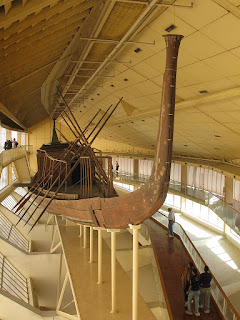 (jay8085, via Wikimedia Commons)
CAIRO, EGYPT—Archaeologists and restorers traveled to the Giza Plateau to investigate the condition of one of the beams of a solar boat buried along with the pharaoh Khufu, which was damaged during an excavation, according to a report from Ahram Online. A Japanese-Egyptian team has been working since 2010 to lift, restore, and reconstruct the boat, which was buried around 4,500 years ago as part of Khufu's burial rites. In all, 745 out of 1,264 pieces of the boat have been removed so far from the excavation pit. One of the boat's beams was damaged by a malfunctioning crane. According to Ayman Ashmawi, head of the Ancient Egyptian Department at the Ministry of Antiquities, the damage appears to be easily reparable. The boat will ultimately be reconstructed and put on display alongside a previously excavated Khufu boat. Both boats were part of the pharaoh's extensive grave goods, intended for use in the afterlife. To read about another discovery dating to the reign of Khufu, go to "World's Oldest Port."