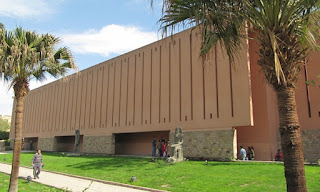 CAIRO – 23 August 2017: One of Egypt's best collection of ancient relics is housed in the Luxor Museum, which purposely opts for quality over quantity when it comes to its selection, ensuring a truly unforgettable trip back to Egypt's magnificent ancient history.

Located in Corniche el-Nile in downtown Luxor, the Museum opened up to the public in 1975. At the time, its collection was more humble and modest, not yet featuring some of its more remarkable artifacts, especially as more archaeological discoveries were uncovered in what was once known as Thebes, now modern day Luxor.

Amongst some of the Museum's many remarkable displays are the preserved royal mummies of Ramses II and Ahmose I, who are shown without their wrappings in a new wing that was added to the Museum in 2004. This wing was made to highlight Thebes during the New Kingdom era, which spanned three dynasties. A multimedia display shows how papyrus was harvested by workers, and how children learned to read and write hieroglyphics. There are also 26 well-preserved statues from the New Kingdom era that were discovered in 1986 in the Luxor Temple, not far from the Museum.

Another one of the museums most striking exhibits are relics taken from the tomb of King Tutankhamen, such as model boats, figures of servants, sandals and arrows, located on the first floor of the museum.

More from the fascinating Ancient Egyptian history, there are Coptic antiques from the 5th century AD and Islamic items dating to the Mamluk period during the 14th century AD, such as small bowls. In Luxor museum, the grandest ancient statues and smallest of daily items, taken for granted in their time, are hailed as examples of Egypt's incredibly long and diverse historical eras.