Ahead of Gamescom 2017 proper, Ubisoft invited AusGamers to a pre-show hands-on event with a new, updated demo of Assassin's Creed Origins to dive into. We played the first batch of the game initially out at E3 earlier in the year and while what we saw then was promising, it was clear then it needed tweaks and changes in a few areas. Namely, with the overall controls and combat mechanics.

Thankfully, we're excited to report that this newest build has not only fixed those problems, but it has tightened up everything across the board. With an entirely new area and new main mission to play through, for the better part of an hour or so, we got our most complete taste of the game yet. And boy, is it something else.

The Land of Sand, Snakes, and Giant Pyramids 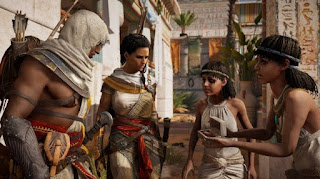 There's no hype train involved in this write-up, because what I played was almost a childhood dream come to life. A youth spent dreaming about exploring the many secrets and wonders of Ancient Egypt. And all the places Indiana Jones got to visit. In a recent interview that we published, the game's lead Ashraf Ismail talked about a "seamless open-world". A sentiment that absolutely rings true. There was no point at all in my hands-on where the game's playspace gated me, or threw up a separate and distracting load-screen. The only time there was a cut, so to speak, was literally during cut-scenes. And those only helped to highlight what was already a cinematic experience. Nestled expertly alongside the seamless open-world.

It's the year 49BCE, Caesar has been pursuing his friend and enemy (perhaps the world's first "frenemy"?) Pompey from the capital of Rome, through Greece and eventually into Egypt, where, Pompey is assassinated. Pompey may have been his enemy in military conflict, but in life they were friends. But more importantly, he was a citizen of Rome, and Homey Caesar don't play that. With that being creating a political problem with Egypt, which is already facing its own challenges thanks to a sibling rivalry between Cleopatra and her brother (and husband, as was tradition at the time) Ptolemy XIII. And so it's in the wake and continuation of the events mentioned above, obviously far more fleshed out in the game, that we meet Bayek -- the Last of the Medjay; protectors of Egypt.

And his ongoing plight to maintain prosperity in Egypt, while fighting away the nefarious machinations of its myriad enemies. 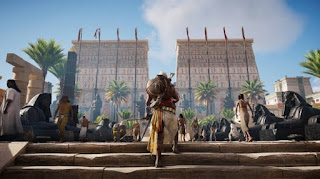 At the beginning of our hands-on, I'm standing on a raft just outside of the city state of Memphis. It is a sprawling city replete with incredible architecture, lush greenery, farms and homesteads. There's wildlife everywhere. And so, naturally the first jerk thing I do is fire off an arrow at a flamingo. I nail it and it falls to water's surface in a pool of blood. But before I can even jump into the water and collect my prize, its carcass is snatched up by the claws of an eagle who'd watched the event unfold to claim an easy meal. I immediately thought to myself, "Okay, this is going to be interesting".

So, rather than set sail for the bank of Memphis, I spot a small island with a ruin on it. Curious I head there hoping to find some treasure or something interesting. What I find instead is a crocodile so perfectly hidden in the reeds of the island's banks that I literally jump out of my seat and squeal like a child. But, my videogame warrior resolve kicks in and I back away as quickly as possible, firing arrows at the reptile's head until it dies. Phew. Not for long, because back to the other side of the bank, two more crocs emerge and begin to attack, followed again by yet another. My only choice at this stage is to climb the ancient structure and pick them off from on high. Once done, off in the distance I see a fishing boat being attacked by a pair of large hippos. 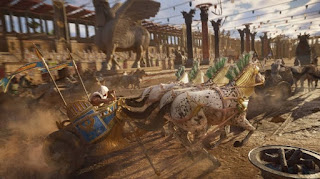 This game-world might be lush and beautiful, but it's also as dangerous as they come.

Wasting no time, I set out for Memphis where I'm tasked with meeting an all-new character Ubisoft has unveiled for the event -- Aya. Aya is Bayek's love, but she serves the Queen. And while context isn't there, meeting up with her lands us a quest to go and check on an ailing cow the locals worship. It's here we discover Bayek's investigative ability, where you push up on the D-Pad (we played on Xbox One X) and all points of interest in the immediate area are highlighted. Once you go through all (or hopefully most) of these, deductions play out and the story/quest advances -- in this case, the cow was being poisoned with a specific fruit so as not to cause too much suspicion. But, we soon learn that it was two priestesses acting under duress given their brother had been kidnapped and his finger sent to them as proof the kidnappers weren't kidding about making them perform their task. 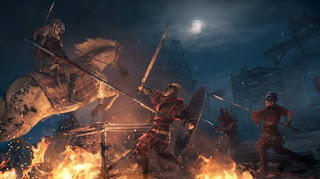 This leads to a classic Assassin's Creed restricted area where, with our eagle whom we can set in flight with another tap of the D-Pad allowing Bayek to gain intel on the soldiers and enemies. Including what level they are and, even more interestingly, what it is they're doing at that moment. RPG? Check. Ancient investigator? Check. Ancient gator? Check. Tactical action? Check.

Laying a half stealth, half open-action assault on the stronghold proves both satisfying and challenging, but I complete my task and return the priestess's brother which in turn lands us a consol with the Queen and her advisor. After this cut-scene, and all the potential spoilers waiting, the demo thanks us for playing the main mission and now asks us to just go out into the world and explore, and it's in this space the game absolutely truly shines.

Traversing the game-world as Bayek is as slick and seamless as any other character in the AC universe. More so even. It's simple things too, such as seeing a small hole in a wall, or a slit near the ground and then watching Bayek's stylish movement as he animates through and around them. The world is also full of mystery, and thanks to our conversation with Ashraf, we know there's an underground world full of treasure and tombs to explore. With my last 20-minutes spent with Assassin's Creed Origins it seemed even larger than even he was letting on. I found at least two caverns by mistake, which lead to treasures and collectibles. I have no real context behind everything I saw, but fittingly it was the pyramid I got to explore that truly opened up this side of the game. 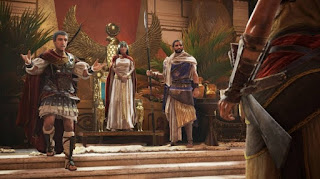 Interestingly, I was able to scale the pyramid to its peak. The climbing was actually a little challenging -- a nice surprise in a series that is usually just centred around context-sensitive movement in climbable spaces. Once inside the pyramid, with cobwebs littering the place, with spiders and more lurking in the shadows Bayek has a torch he can use, and throughout the darker areas you can find small lanterns to light up in order to illuminate the rooms. What was excellent here though was the inclusion of puzzles, built around progression to higher places. Another fresh idea given most other Assassins can just climb anywhere. Weight displacement and more come into play, eventually leading to treasure rooms with both tangible rewards as well as tales, stories and accounts of this rich land's past.

And can I just add, once again, this whole thing was seamless.

We're still a little way out from the game's release, but in what I played here the team are iterating, polishing and delivering on their promises. I can't wait to see what else lies beneath and beyond the shifting sands of Ancient Egypt.

Read more about Assassin's Creed Origins on the game page - we've got the latest news, screenshots, videos, and more!
inShare
Posted by Glenn Meyer at 9:28 PM