At the Mudec, original documents from his tomb go on display 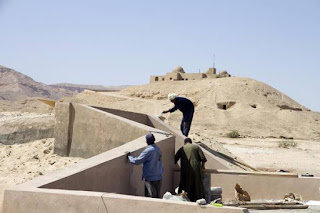 (ANSAmed) - MILAN, AUGUST 29 - Ancient Egypt will be featured at Milan's Museum of Cultures, Mudec, with the exhibition "Egypt: The Extraordinary Discovery of Pharaoh Amenhotep II" on display from September 13 through January 7.

The exhibition centres on Amenhotep II, who lived between 1427 and 1401 BC and was a son of the sixth pharaoh of the Eighteenth Dynasty, Thutmose III.

Amenhotep II hasn't previously had a dedicated exhibition and is little-known to the public, perhaps because of the shadow cast by his famous father, but also because documents related to the discovery of his tomb only came to light about 15 years ago.

His tomb was discovered in Egypt's Valley of the Kings in 1898 by the archaeologist Victor Loret.

The documents from that expedition are now the property of the University of Milan, which conserves them in its Egyptology archives and is putting them on loan for the exhibition, to be viewed by the public for the first time ever. The precious materials on display will be shown through a reconstruction on a 1:1 scale, from the room of pillars to the pharaoh's tomb.

The immersive experience invites visitors to discover the burial chamber through a focus on the funerary cabinets and mummification, to admire the treasures that accompanied the pharaoh in his journey to the other side.

The archaeologist Loret brought to light not only the mummy of the pharaoh, but also those of some other famous New Kingdom royalty, which were hidden inside one of the four rooms attached to the burial chamber in order to keep them away from tomb raiders. Included among the bodies Loret discovered in the tomb were those of Tutankhamun's mother and grandmother. The ancient civilisation of the Nile at the time of the 2nd millennium BC will also be examined in other sections of the exhibition, thanks to artifacts on loan from the Egyptian Museum in Cairo, the Rijksmuseum van Oudheden in Leiden, the Kunsthistorisches Museum in Vienna, and the National Archaeological Museum of Florence.

The show is sponsored by the City of Milan-Culture and by 24 ORE Cultura - Gruppo 24 ORE, which is also producing the show, in collaboration with the University of Milan.

The exhibition's curators are University of Milan professors and Egyptologists Patrizia Piacentini (chair of the Egyptology department) and Christian Orsenigo.

They designed the show together with the coordination of Egyptologist Massimiliana Pozzi Battaglia of the Cooperative Archaeological Society (SCA).(ANSAmed).


© Copyright ANSA - All rights reserved
Posted by Glenn Meyer at 7:17 AM