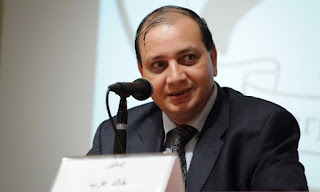 Bibliotheca Alexandria is one of Egypt's most important social platforms

ALEXANDRIA - 14 August 2017: "Bibliotheca Alexandria is considered to be one of the most important social platforms in Egypt. Under the supervision of Dr. Mostafa El-Feky, the program wants to combat extremism and intellectual terrorism.

It was launched on July 13, 2017 with the invitation of President Abdel Fatah al-Sisi. It is a model for dealing on multiple levels with the issues of countering extremism," Dr. Khaled Azab, head of the Central Projects and Services sector at Bibliotheca Alexandria told Egypt Today.

The program aims at re-educating young people on true Islamic culture, with an emphasis on the values of citizenship and multiculturalism in Egypt. It is operated in cooperation with Al-Azhar Al-Sharif and the Ministry of Religious Endowments. The program will emphasize the importance of dialogue with the "other", especially with western countries.

The program is being implemented as follows:

At the international level: Contact with a number of research centers and universities, especially in Britain, France, Germany, Lithuania and elsewhere, has strengthened the beginning of a dialogue between the Faculty of Divinity at the University of Cambridge and the Library of Alexandria.

At the regional level: The number of centers, institutes and universities that have signed partnership agreements for cooperation with the library has increased, and four seminars have been held in Jordan, Tunisia, the United Arab Emirates and Morocco
At the local level: the Library of Alexandria has intensified the Islamic Culture Courses, especially in Egypt's various cities, including Assiut, Port Said, Fuwah, Cairo, Alexandria, Luxor and Hurghada

Dr. Khaled Azab is representing Egypt in China on August 16 in the Chinese initiative to fight terrorism. Dr. Azzab told Egypt Today that China is facing problems because some of the Chinese Muslims have been affected by the radical thoughts of ISIS. The only way to conquer these ideas is by the contribution of the Arab Islamic countries, and Egypt is one of the most important factors.

"The library was economically influenced by the recession, though 2016 to 2017 was the largest movement published in the library's history.

A comprehensive encyclopedia about Islamic shrines in Egyptian history by the Egyptian scholar Abd al-Rahman bin Hasan bin Burhan al-Din al-Jabarti, which is considered the first historical encyclopedia of the Library of the Egyptian General Dictionary and the issuance of the Sumerian Akkadian Dictionary on Sumerian Academies in Iraq," Dr. Khaled told Egypt Today.