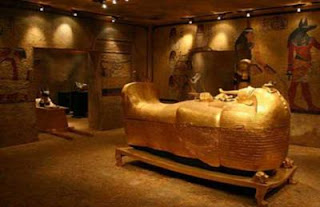 According to Dr. Abdel Hakim Karrar, Archaeologist in  Egypt, the excavations carried out by the Swiss archaeological delegation of the University of Basel in the Valley of the Kings in Luxor's West Bank have uncovered several rooms inside tomb KV.40 that were apparently used by the children of the royal family, specifically sons of the Kings Thutmose IV and Amenhotep III (1400-1350 B.C.)

The delegation also found some of the pottery that were used in their households carrying Hieratic inscriptions that upon translation were found to contain more than 30 names. Among them were eight princesses like "Ta-Em-Wagit" and "Nefru-Nebu" and four princes, in addition to foreign women's names. This discovery was particularly significant because at least 50 non-royal mummies were found in addition to some carefully wrapped mummies of newborn

Karrar said that the wood and cartonnage remains found point out that this tomb was reused after the Valley had been abandoned but that it was not used by royalty. They also confirm that some priests from the 9th century B.C. have been to this place.

Anthropological analysis and further examination of the remains will help form a better understanding about the ancient Egyptian royal court and the rites of burial in the eighteenth dynasty.