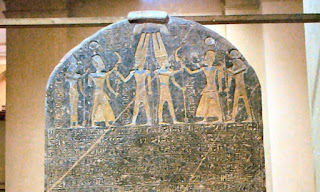 CAIRO, Aug 14 (MENA) – The General Manager of the Egyptian Museum in Tahrir Square Sabah Abdel Razik said on Monday that the description of Merneptah Stele was changed from Israel Stele to the Victory Stele of Merneptah.

In exclusive statements to MENA, she added that the description of the Stele had lasted for 10 years, adding that a committee was formed recently to discuss the issue and it decided to change the name of the stele after founding that there is an error in the description.

Merneptah was the fourth ruler of the Nineteenth Dynasty of Ancient Egypt. He was born in 1273 BC, ruling Egypt for almost ten years from 1213 BC until his death in 1203 BC. He was the thirteenth son of Ramesses II.

The Victory Stele of Merneptah was discovered by Flinders Petrie in 1896 at Thebes.

The text is largely an account of Merneptah's victory over the Libyans and their allies, but the last 3 of the 28 lines deal with a separate campaign in Canaan, then part of Egypt's imperial possessions.

The stela represents the earliest textual reference to Israel and the only reference from ancient Egypt.