(Near the intersection
of Bancroft Way
and Barrow Lane) 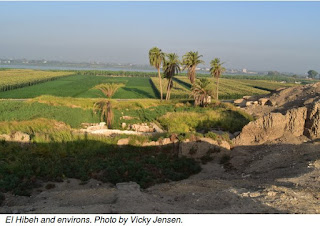 Dr. Redmount has just returned from El Hibeh, where she and her archaeological team from Berkeley worked this summer. This lecture will bring us up to date on the remarkable and sometimes heartbreaking modern story of this ancient site.

From (https://en.wikipedia.org/wiki/El_Hiba):
El Hiba (alt. el-Hibeh; Arabic الحيبة) is the modern name of the ancient Egyptian city of Tayu-djayet (t3yw-ḏ3yt), an ancient nickname meaning "their walls" in reference to the massive enclosure walls built on the site. In Coptic, it was known as Teudjo, and during the Graeco-Roman Period, it was called Ankyronpolis. In antiquity, the city was located in the 18th Upper Egyptian nome, and today it is found in the Bani Suwayf governorate.
From the late 20th Dynasty to the 22nd Dynasty, Tayu-djayet was a frontier town, marking the division of the country between the High Priests of Amun at Thebes and the kings of Egypt at Tanis. A massive enclosure wall was built at the site, with bricks stamped with the names of the High Priests Pinedjem I and Menkheperre. Earlier, the High Priest Herihor also lived and operated from al-Hibah. During the 22nd Dynasty, king Shoshenq I built a temple dedicated to "Amun-Great-of-Roarings" at the site, complete with a topographical list of cities captured during his "First Campaign of Victory" in Palestine; the temple is also decorated by his son, Osorkon I. The ancient settlement is at 28°47′14″N 30°55′16″E a little to the North of the modern town. Since 2001, El Hibeh has been the focus of ongoing excavations by a team of U.C. Berkeley archaeologists. However, due to instability as a result of the 2011 Egyptian Revolution, looters have been allowed to systematically plunder the site, digging hundreds of pits, exposing tombs, destroying walls, and leaving human remains strewn about the grounds. 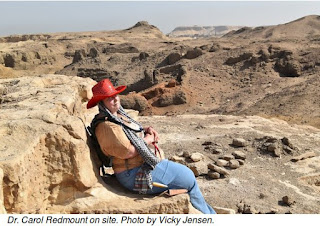 About the Speaker:
Carol Redmount is associate professor of Egyptian archaeology in the Department of Near Eastern Studies at UC Berkeley, which she currently chairs. She is principal investigator of the campus's archaeological excavation project at El Hibeh.

Ph.D. with distinction, University of Chicago, March 1989; Near Eastern Languages and Civilizations, dissertation "On an Egyptian/Asiatic Frontier: An Archaeological History of the Wadi Tumilat"
M.T.S. Harvard Divinity School, 1976; Old Testament/Hebrew Bible Studies B.A. with Highest Honors in Religion, Oberlin College, 1974; Anthropology and Religion Double Major; Phi Beta Kappa
----------
Parking is available in U.C. lots after 5 p.m. on weekdays and all day on weekends for a fee. Ticket dispensing machines accept either $5 bills or $1 bills, and credit cards. Parking is available in Parking Structure B on Bancroft between Hearst Gym and Kroeber Hall and just across the street from the University Art Museum. Parking is also available under the shops on Bancroft opposite Barrows Hall. There is a parking structure under the Student Union further west on Bancroft.

A map of the campus is available online at
http://www.berkeley.edu/map/
For more information about Egyptology events, go to
http://www.arce-nc.org
or
https://www.facebook.com/NorthernCaliforniaARCE
Posted by Glenn Meyer at 10:20 PM