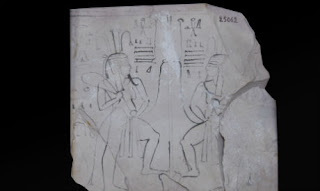 The Ostrava exhibited as the piece of the month

To celebrate Flooding of the Nile Day, the Egyptian Museum in Tahrir Square is organising two free guided tours for evening visitors.


Elham Salah, head of the Museums Sector at the Ministry of Antiquities, revealed that the tours would be in Arabic and be held 18 and 24 August, during the museum's evening open hours.

Salah said that guided tours in English would be provided on request during the same hours of the Arabic tours. Sabah Abdel Razak, director general of the Egyptian Museum in Tahrir Square, explained that the tours would go through all exhibited artifacts connected to the Nile, such as boats and the Nilometer.

The museum"s August piece of the month is a limestone Ostrava depicting the Nile god Hapi.