No this is not some college prank. As for the giant, it's all relative. Glenn

An ancient Egyptian pharaoh who ruled 4,700 years ago was a giant, scientists have announced. The remains, believed to belong to King Sanakht, who ruled during the third dynasty, are believed to represent the oldest case of gigantism ever found—indicating the condition was not associated with social isolation.

In an article published in The Lancet Diabetes & Endocrinology, experts analyzed skeletal remains discovered in 1901 in a tomb near Beit Khallaf, Egypt, around 70 miles northwest from Luxor. While it is unclear to whom the tomb belonged, relief fragments bearing Sanakht's name led people to believe it belonged to this little-known king.

The tomb contained the remains of a very tall man: He would have stood at around 187cm, or 6 feet 1 inch tall. That is much taller than other Egyptians of that time, who would have been closer to 5 feet 4 inches on average.

Francesco M. Galassi, from the University of Zurich, and his colleagues, believe Sanakht's unusual height was the result of gigantism, a hormonal condition that results in abnormal excessive growth. If correct, this would be the earliest ever diagnosis of the condition. Other earlier skeletons have been diagnosed with acromegaly, and while both acromegaly and gigantism have a similar cause, acromegaly occurs in adulthood, and gigantism occurs in childhood.

In their investigation, the team looked at different measurements of Sanakht's skull and compared them with data from anthropological databases. They scored their height averages against those of ancient Egyptian commoners to see how much taller he was. While royalty were generally taller than common people, King Sanakht was "much taller" than all the others. "From all known royal mummies, no other king or queen fulfils the requirement of gigantism," the team wrote. 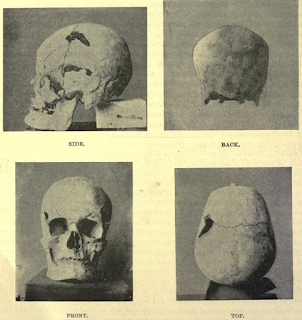 This skull is believed to be that of King Sanakht, of ancient Egypt's third dynasty. Charles Samuel Myers/CC

Analyzing the skeleton, they said that "only his long bones show signs of exuberant growth (gigantism)," adding that the dimensions of his face are not enlarged to the same extent. "The alleged Sanakht probably had gigantism, truly being the oldest known palaeopathological case in the world.

"In ancient times, no surgical or pharmaceutical treatment would be available; therefore, regression could only have resulted from degeneration of the pituitary gland. Infarction, a known clinical phenomenon in the modern world, could have occurred."

While the researchers note that it is "far from certain" if the remains from the tomb did belong to Sanakht, "the medical assessment of potential gigantism [in] this case has a great value as it could be the oldest known case."

Furthermore, even if the giant was not the king in question, he was likely someone from the upper classes. "The fact that he was buried with honours in an elite mastaba-tomb, after reaching adulthood, suggests that gigantism at the time was probably not associated with social marginalization."

This discovery could shed light on society in ancient Egypt. It is known that short people and dwarfs held special positions of authority and were often believed to possess celestial gifts. "While short people were much preferred in ancient Egypt, especially in the early dynastic period, we have no records that very tall people had any special social preference or disadvantage," the researchers conclude.