The Railway Museum, a glimpse of transportation history - Egypt Today 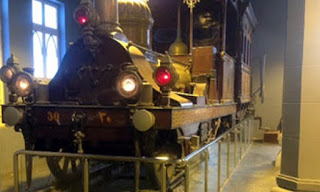 The Railway Museum, a glimpse of transportation history

CAIRO - 15 August 2017: The Egyptian Railway Museum is located in Ramses Square. It was officially opened on January 15, 1933. It was established to celebrate the International Railway Conference, which took place in 1933.

The conference participants at that time perambulated the museum, which was the first Railway Museum in the Middle East and the second in the world after the British Railway Museum. The Egyptian Railway Museum is a two storey building that consists of five main sections; the first section is 'Transportation before steam engines,' this section shows clearly the history of transportation and its start since the ancient Egyptian era until the invention of steam engines. It houses interesting models of boats that pharaohs were using, as well as gadgets used by ancient Egyptians.

The second section is 'Trains,' which is considered the most important section in the museum. It gives detailed information about the development stages of trains till the present.

The third is the 'Stations' section, which includes many train station models. The fourth is the 'Bridges' section, which houses models of railway bridges. The fifth and the last is the 'Airplane' section that provides a detailed history about airplanes from early inventions till now.

The Egyptian Railway Museum contains more than 700 pieces of models, in addition to a collection of documents and maps that reflect the development of transportation through the last decades. Therefore, the Railway Museum is regarded as the most important museum to collect information about transportation in the Middle East.

The Egyptian Railway Museum was renovated in March, 2016. The renovation process cost LE 10 million ($0.562 million).
Posted by Glenn Meyer at 7:30 AM